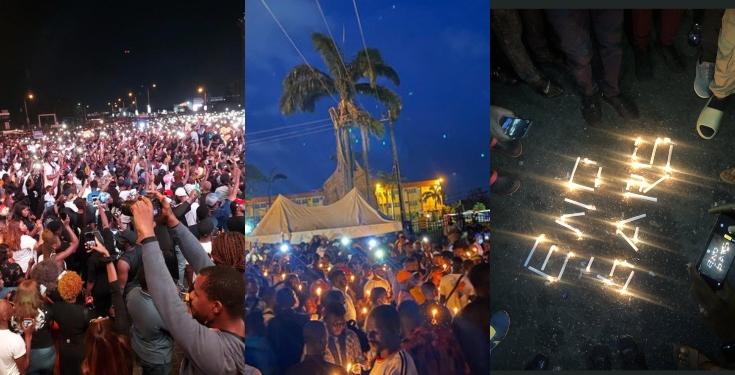 Nigerians Remember Those Lost to Police Brutality in #EndSARS Vigil

Nigerian youths on Friday night took to the streets to hold a candlelight vigil in honour of all those who have been killed by the now-defunct Special Anti-Robbery Squad (SARS) and the Nigerian Police Force (NPF) in general.

Following the #EndSARS protest which has lasted for 10 days, the protesters gathered around various states across to country to mourn the death of friends, loved ones, and family members who met their cruel end at the hands of SARS officials.

The candlelight ceremony took place on Sunday night, October 18, 2020, at various areas of the Lagos metropolis, Abuja, and in Port Harcourt.

During the candlelight event, prayers were said for the victims, after which the demonstrators sang the National Anthem in respect of the country.

Those who could not join the event physically have taken to social media in solidarity with the protesters on the ground to honour fallen heroes.

The demonstrations have hit the largest city, Lagos, the capital, Abuja, and other cities including Port Harcourt, Calabar, Asaba, and Uyo.

Such a powerful, prayerful moment! 😭
We remember our heroes who've paid the ultimate sacrifice.
We promise them that we will not stop fighting for them✊
We will fight & we will win.
Please #Retweet & share this video
🎥: Candle light procession @ NAUTH#EndSarsNow #sorosoke pic.twitter.com/sgY5Jsywtn

In response, the Nigerian government announced it would disband a police unit known as the special anti-robbery squad, or Sars, that was implicated in a video that showed a beating which was widely viewed online.

But the closure of the police unit has not satisfied the protesters who say they want to see an end to all police brutality, an end to corruption, and respect for human rights.

Their demands include the release of all arrested protesters, justice for victims of police brutality and compensation for the victims and their families, as well as prosecution of those suspected to be responsible.

“These protesters have been met with violence and excessive use of force. … Nigerians are sceptical of authorities’ pledge to end police atrocities because the past claims of reforming Sars have turned out to be empty words,” Osai Ojigho, director of Amnesty International Nigeria, said in a statement.

“That police are still using excessive force on peaceful protesters, leading to injuries and deaths in Lagos, Ughelli, Abuja and Ogbomosho, throws through the window claims of any commitment to ending violations of human rights by Nigeria police,” said Ms Ojigho.

Festus Keyamo, Nigeria’s labour minister, said the man shown being beaten in the video that has sparked the demonstrations did not die as was initially reported and has been discharged from hospital.