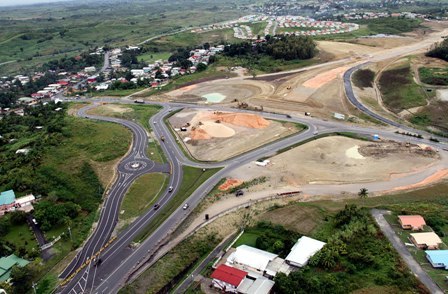 The National Infrastructure Development Company Limited (NIDCO), is today refuting claims about allegations made by Leader of the Highway Re-Route Movement, Dr. Wayne Kublalsingh, that work on the Debe to Mon Desir segment of the Sir Solomon Hochoy Highway segment has restarted.

According to a release sent by NIDCO are debunking claims that work has not re-commenced on this segment of the Highway, and as a result this project they are claiming that they cannot be responsible for the recent flooding experienced in Penal and surrounding communities.

The release also claims that the Ministry of Works and Transport and NIDCO have both clarified this to Dr. Kublalsingh on several occasions in the past and he is fully aware of the facts.

“It should be noted that the current focus of the Government is to complete the segment of the Highway
from San Fernando to Point Fortin. The additional works that are being conducted are a connection from
Mon Desir to Fyzabad Road and completion of the Oropouche River Bridge.

“The work on the Oropouche River Bridge is imperative to protect the integrity of the bridge’s infrastructure that was partially completed by the terminated contractor, Construtora OAS S.A. These additional works form part of the
obligation of the Government as mandated by the Court of Arbitration in London,” according to NIDCO.

NIDCO wishes to reiterate that no further works as part of the Solomon Hochoy Highway are on-going or
planned between Gandhi Village and Fyzabad Road.
NIDCO, and by extension the Ministry of Works and Transport wishes to reiterate that all its work is
conducted in a manner that will protect any known environmentally sensitive areas, and performed
with minimal inconvenience to citizens.

NIDCO also stated that they have observed all the terms and conditions of the Certificate of Environmental Clearance.

Minister urges citizens to live a life free of violence 0

Dr. Rowley says the relationship between T&T and Barbados is strong 0