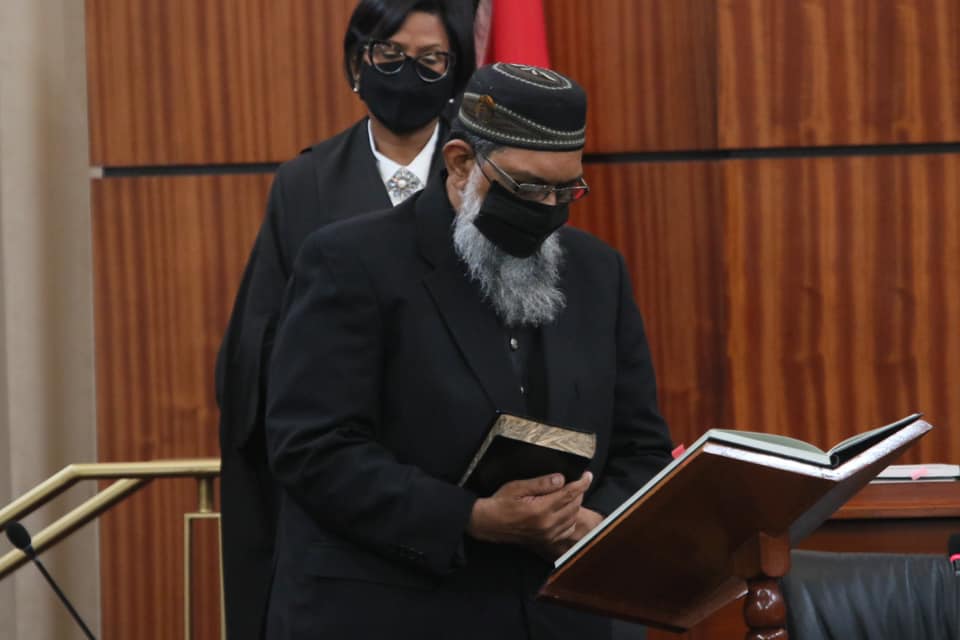 A new PNM Senator undertook the Oath of Office, following the vacancy created on the Government Bench in the Senate after the passing of former Energy and Energy Industries, Franklin Khan.

Senator Imam Sheraz Ali was administered the Oath following correspondence received from Her Excellency the President of the Republic of Trinidad and Tobago Paula Mae Weekes upon the advice of Prime Minister Dr. the Hon. Keith Rowley, M.P.

Senator Imam Ali, who is fluent in English and Arabic, is a graduate of the UWI and holds a BSc in Agriculture, a BSc in Arabic & Islamic Studies, and a MSc in Food Science and Technology.

He is currently enrolled at the UWI St Augustine where he is reading for a PhD in Agricultural Extension. He is an alumnus of Iere High School, Siparia; Presentation College San Fernando; and the San Fernando Secondary School.

Moments after taking his oath, Senator Imam Sheraz Ali said, “I am honoured to be given the opportunity to serve our nation and to bring to the Parliament the views of the people of Trinidad and Tobago, so that we can progress together as a unified society. I wish to especially thank the Prime Minister for the faith shown in my ability to serve the nation in this capacity.”

In welcoming the new Senator, Leader of Government Business in the Senate, Senator the Hon. Clarence Rambharat stated “Senator Ali is currently a Board Member at the Cocoa Development Company.