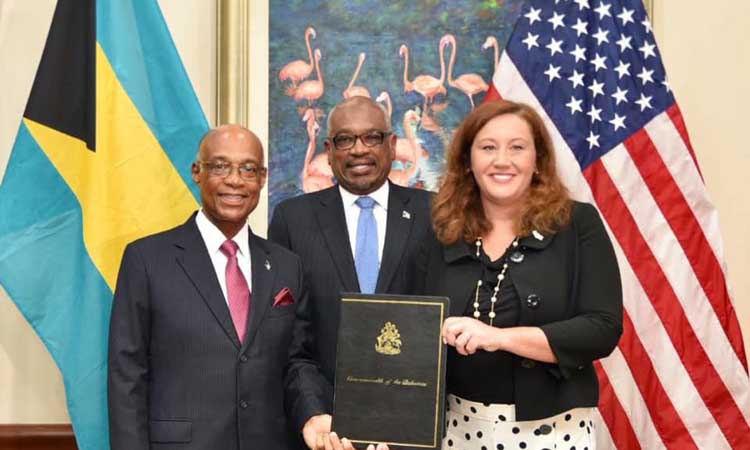 The United States and the Bahamas say the construction of a new US embassy building here underscores the enduring friendship as well as emphasizing the importance of the bilateral relationship between the two countries.

“Our two nations have deep ties of friendship. We are bonded by history and geography and shared democratic and civic values. This new US$318 million dollar facility, which will reside on a five-acre site, will serve as a symbol of our longstanding relationship,” Prime Minister Dr. Hubert MInnis told the groundbreaking ceremony.

He said the decision by Washington to construct the embassy in the City of Nassau, is evidence of the strength of the relationship between our countries.

“While the United States is our major trading partner, and close ally with whom we have deep security ties, the U.S. response to Hurricane Dorian is evidence that you are also a true friend,” he said, in reference to the death and destruction caused by the Category 5 storm last month.

The project is expected to be completed in 2023.

Washington said since the start of the State Department’s Capital Security Construction Programme in 1999, the US Bureau of Overseas Buildings Operations OBO has completed 162 new diplomatic facilities and has an additional 51 projects in design or under construction.

Minnis told the ceremony that at peak construction, 160 Bahamians will be employed and that the new complex will be energy- efficient.

“This new embassy is part of the wider redevelopment and revitalization of the City of Nassau into a vibrant, modern city,” he said, adding that in partnership with Global Ports Holding, “we are embarking on a quarter of a billion-dollar project to redevelop what will become the world-renowned and new Nassau Cruise Port.

“The City of Nassau is re-emerging as a dynamic, vibrant city, celebrating and showcasing Bahamian heritage and history. The Government of the United States could have chosen another location on New Providence to build this new embassy,” he added.