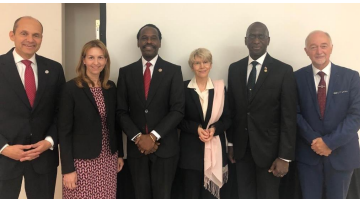 Current issues of drug trafficking in the region, particularly through maritime corridors were discussed during a High-Level Seminar on Narcotic Smuggling in the Caribbean Region.

Minister of National Security, Fitzgerald Hinds, participated in the seminar which took place in Miami.

It was hosted by the Permanent Observer Mission of France to the Organization of American States and the Caribbean Regional Office of the Directorate-General of Customs and Indirect Taxes of France.

The Seminar also provided a space for the exchange of information and best practices in counter narcotics trafficking.

In a media release on Friday, Minister Hinds took the opportunity to share insights on Trinidad and Tobago’s specific context that may improve efforts to counter the illicit trafficking in narcotics in other countries in the region.

Minister Hinds also highlighted that the Seminar allowed for the advancement of efforts to address illicit maritime smuggling more broadly, which will not only impact narcotics smuggling, but also the illicit trade in firearms, and the trafficking in persons, which contribute significantly to violent crime in the region.