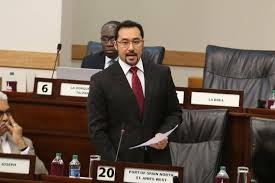 National Security Minister claims he was misquoted over ‘fishermen’ statement

The Minister of National Security, Stuart Young, today claims that he was misquoted and his words intentionally taken out of context with respect to persons who claim to be “fishermen”.

Minister Young via a media release said he has never said that the men who were attacked by local criminals
earlier this year and were forced overboard and murdered were not “fishermen”.

Minister Young also said the media misled one of mothers whose son was killed during a report on the situation.

The media release also states that Minister Young in the Senate on Wednesday October 23, had questioned the circumstances surrounding persons who were kidnapped and paid a ransom of USD$20,000 in cash.

And says he has no issue with the families of those who lost their relatives earlier this year at the hands of local criminals.