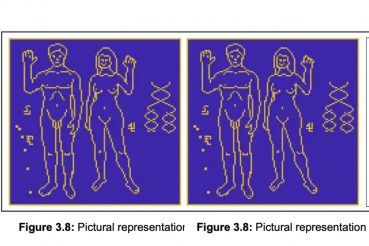 NASA is sending nudes to space to make contact with aliens

In an effort to get the attention of aliens, the National Aeronautics and Space Administration (NASA) will be sending drawings of nude people to space.

TMZ reports that NASA’s new project is called “Beacon in the Galaxy,” and it’s using drawn depictions of the human male and female to hopefully get in contact with aliens.

The photo shows the male and female humans waving “hello,” and on the sides of the drawing are depictions of DNA and an image of gravity. Images like these have also been attached to space crafts for Pioneer missions 10 and 11.

The news outlet reports NASA will send the messages out in binary code, along with fundamental math and physics concepts, to gauge aliens’ forms of communication.