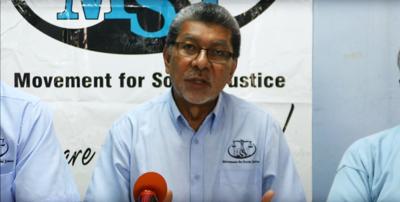 “Where we are going under this Rowley Government, is down a road where few benefit tremendously and the majority are sucking salt.”
Those of the words of the head of the Movement for Social Justice (MSJ), David Abdulah, who is calling on workers to unite and fight against re-colonisation.

In his Labour Day message from Marabella on Friday, Abulah said that all of which was won as a result of the struggle of 1937, is now under threat from this Rowley-led PNM Government.

“On this 85th anniversary of June 19, 1937, the MSJ is saying to the workers of TT, you have to once get that spirit of the warrior workers of 1937. Those workers were united in struggle, united to take disciplined mass action in defence of their interest.”

He added, “We need to unite as warrior workers, to have a revolution of the mind, to break free of ethnic loyalty that has prevented us from taking collective, disciplined mass action.”

Abulah said “This Rowley PNM Government is the worst government we have had” as they are “seeking to return us to conditions not far different of 1937.”

According to Abulah, our economy is being more and more controlled by the “massas of yesterday,” adding the “Rowley Government is seeking to return massa to the power that massa had before.”

“All of the energy companies are back. BP and Shell, which left in the 1960s and 1970s, are back here big time. Our natural gas industry is controlled by foreign nationals once again.”

He said the “local massas”, who own conglomerates and big corporations are also controlling more and more of the wealth.

“Wealth is being concentrated more and more in the hands of a few rather than benefiting the majority for the common good, as the Constitution requires. That is why we are saying the country is going backwards.”

Abdulah also noted, “Pension plans are no longer there, medical plans for workers and so many other benefits workers fought for and won from 1937 to now are being reversed as we return to the conditions where massa is in charge.”

“This Rowley Government is seeking to restructure the society of TT in a way that is going to get us further and further down the road of barbarism.
“That is why so many of our young people are frustrated and angry, why they are turning to violence, because they are being denied proper access to equitable educational opportunities.”

Shopkeeper shot during a robbery in Curepe 0