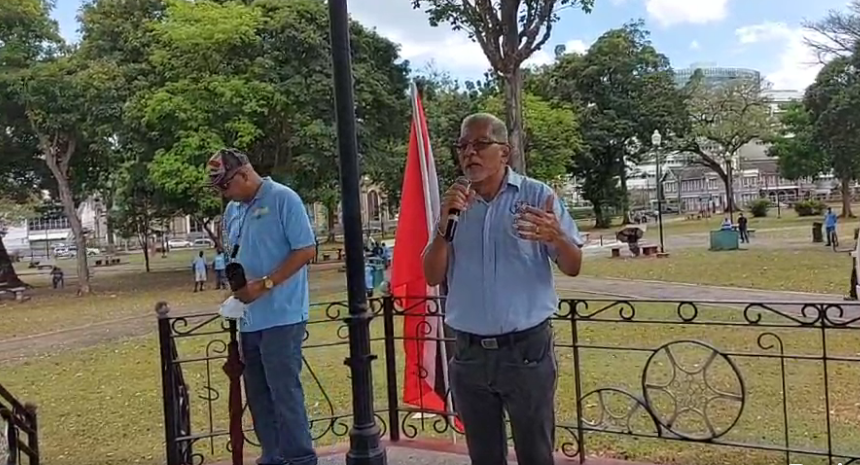 “Who have more corn supposed to feed more fowl in this rounds.”

That’s the view of the Movement for Social Justice (MSJ) as they call on government to find other ways to subsidise the cost of fuel.

In fact, the union wants government to reverse the rise in fuel prices, increases taxes on the wealthy businesses and invest in TT to mitigate the high price of food.

The union held a march and rally on Saturday, which started at the Queen’s Park Savannah and ended at the Woodford Square in Port of Spain.

MSJ political leader David Abdulah said the march was just the start of the fight for these two issues and suggested raising the taxes of big profitable companies such as Ansa McAl, Angostura, Agostini, Massy, Republic Bank and Scotiabank as well as those with large salaries and using that money to subsidise fuel prices.

He said paying $40 more on a tank of gas would not bother those working for $50,000 (a month) but it would affect “ordinary working people” including taxi and maxi taxi drivers who would then have to increase fares.

He said, “Farmers are not being supported. But if we grow more yam and cassava and breadfruit and sweet potato, we wouldn’t have to depend on wheat, whether it comes from Ukraine or Russia if in war or not in war, whether it has sun in Australia or snow and storm in the United States and Canada. We wouldn’t have to worry about that if we produced it here in TT and in the Caricom region.”

Oilfields Workers’ Trade Union (OWTU) president general Ancel Roget, who also spoke at the rally, said that the rise in fuel cost would affect “every facet” of the cost of living and people’s way of life.

He said, “It’s time for us to stop the complaining, stop talking about what they do, and prepare to tell everybody what we are prepared to do, supported by like-minded people.”

Roget said if the refinery was operational today, using local and imported oil, Petrotrin would have been able to buffer the effects of the worldwide increase in oil and fuel prices.

“They are trying to get away from the fact that their failed policy, one significant action among many others, which was the closure of Petrotrin and the refinery, have us in this (fuel) debacle here today.”

Roget said they should resign or the people of TT should be prepared to vote them out of power for their actions that caused the average person to suffer because of poor governance, arrogance in governance, and because they did not care about things that did not affect them significantly.