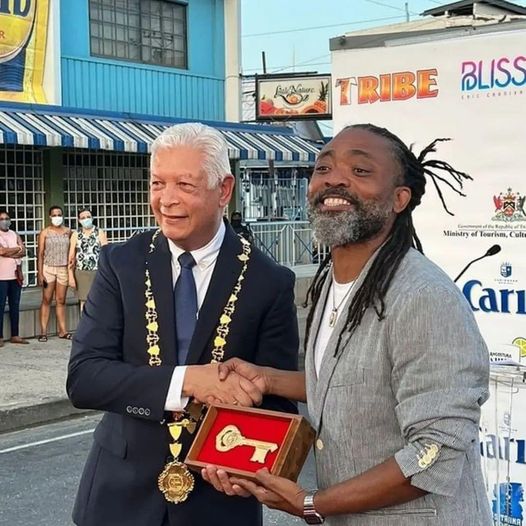 Montano given keys to the city of POS

Tribe’s three day SunsetWKN kicked off in fine style on Friday, with the highlight being the keys to the city of Port of Spain being awarded to soca icon Machel Montano.

Montano was presented with the keys to the capital city by Mayor Joel Martinez, during a special statutory meeting of the Port of Spain Municipal Corporation at Adam Smith Square.

The king of soca received the honour in recognition of his 40 years in the entertainment business and said: “The key to success is consistency, integrity, putting your best foot forward, being fully involved, but most importantly, doing it in the service of mankind.”

“This is why I do music. This is why I’m here today celebrating 40 years of serving my family, my friends and most importantly, my fans. This key is another opportunity for me to go another 20 years and inspire others.”

Tribe’s three day SunsetWKN began with a Sunset Theatre last evening and a parade from Ana to Murray Streets along the Avenue.

Tonight, all bands under the Tribe banner (Bliss, Harts, Lost Tribe, Pure, Rogue, Tribe – will unveil their 2023 themes and costumes at the Hasley Crawford Stadium.