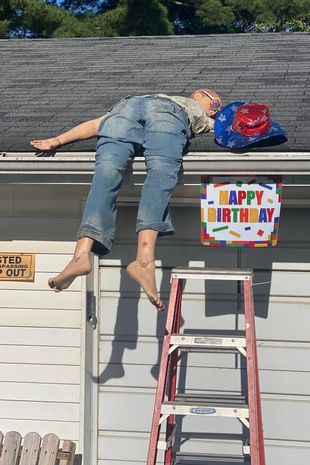 A mother who was sick of her nosy neighbours ‘spying on her’ decided she would give them something to stare at.

She erected mannequins in her garden which she posed as drunks and accident victims to scare them. Tammy Zuniga claims the curtain-twitchers next door would ‘make her blood boil’ with complaints about her painting in her garage without the door shut, and would even take photos of her at work.

Tired of ‘resenting’ them and eager to turn the tables on the ‘busy-body neighbours’, the 45-year-old nurse began erecting mannequins around her property in provocative positions just to ‘see their reactions’.

Some mannequins were left in her car, and some were ‘passed out’ on a garden chair surrounded by empty beer bottles.

“I try to keep a straight face through it all. I figure that if the neighbours think I’m crazy, they’ll stop bothering me. It’s worked for the most part. Neighbours don’t really talk to me much anymore, which is kind of nice. They probably think I’m the weird mannequin lady now.”