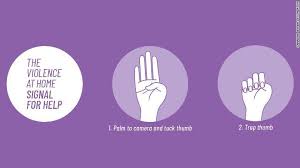 A missing teenager from North Carolina, USA, was rescued by sheriff’s deputies after she used an “I need help” hand gesture widely disseminated on Tik Tok to signal a passing motorist.

According to a statement from the Laurel County Sheriff’s Department, the driver who spotted the teen signaling to him from the back of another car on a Kentucky highway called 911 and continued to follow the vehicle.

The 16-year-old girl, who had been missing from her home in North Carolina for days, used the gesture developed by a women’s groups as a way to surreptitiously signal for aid in domestic violence situations.

”The complainant, noticed a female passenger in the vehicle making hand gestures that are known on the social media platform TikTok to represent violence at home,” the sheriff’s statement read.

The signal involves holding up a hand, palm out, in a “stop” gesture, then closing the hand with the thumb inside.

Police stopped the car as it exited the highway and arrested the driver, James Herbert Brick of Cherokee, North Carolina, on suspicion of “unlawful imprisonment,” officials said.

According to the teen, she had been taken by Brick through North Carolina, Tennessee, Kentucky and Ohio, states the sheriff’s department release.

Children’s Authority call for an end to corporal punishment 0