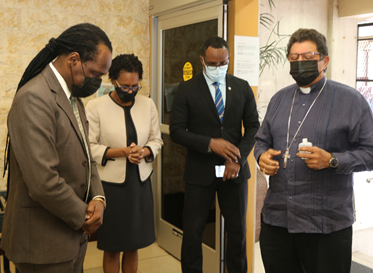 Minister Hinds meets with the Archbishop on social issues

Several matters pertaining to public safety and security were discussed during a meeting Minister of National Security, Fitzgerald Hinds, held today with the Archbishop of Port of Spain, Jason Gordon.

This included issues directly affecting several communities in Trinidad and Tobago and ways to engage them for fuller participation in national life.

Matters relating to Venezuelan nationals in Trinidad and Tobago and the missionary work of the Catholic Church in this country also formed part of the discussions.

Both parties expressed best wishes and committed to work together to resolve present challenges and maintain a peaceful environment in Trinidad and Tobago.

In a media release this afternoon, Minister Hinds said he enjoyed the meeting and described the points presented by the Archbishop as intellectually sound and inspiring.

The meeting took place at the Ministry of National Security, Abercromby Street, Port of Spain following a request by the Archbishop.

Police trying to I.D female killed in hit and run accident in Couva 0