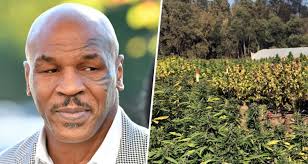 Mike Tyson has announced plans to bring his marijuana empire the Caribbean with an annual conference in Antigua to rival the World Economic Forum’s meeting at Davos.

The former heavyweight champion met with Prime Minister Gaston Browne to discuss plans for an annual conference starting in April 2020 and a cannabis farm.

Tyson is pioneering cannabis tourism with his 420-acre Tyson Ranch in California, which will feature a luxury hotel and golf course for guests to enjoy while lighting up.

Iron Mike said he wanted Antigua and Barbuda to become a ‘powerhouse’ for the plant and told reporters on September 20: ‘It will be good for the country and will bring in much-needed funds to help your economy.’

Antigua and Barbuda is still reeling from Hurricanes Irma and Maria in 2017 and relies on money from tourism to help rebuild its communities.

Sitting alongside the fighter, Prime Minister Browne, said: ‘[The conference] will be like the Davos of cannabis; it will take place on an annual basis and will bring stakeholders from throughout the globe for that matter right here on Antigua to discuss various opportunities within the industry.

‘So, we are very excited about that. They are also interested in establishing a hotel accommodation property and they will be looking at a number of sites to determine suitability.’

One of Tyson’s colleagues said Antigua was chosen for its hospitality, beauty, location, and history.

The boxer owns Tyson Holistic Holdings, which he created in 2016. As well as building the ranch, it sells marijuana strains, edibles, and merchandise.

After scouting out the possible opportunities in Antigua and Barbuda, a concrete plan will be established between Tyson and the government.

Scientists Want to Build a Sperm Bank on the Moon 0