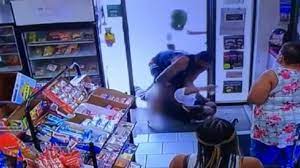 The man, identified as Jamal, says he won a $30,000 lottery ticket and purchased a $20,000 gold chain with the earnings.  Earlier this week, he said he was chased into the gas station and tackled to the ground. Moments later, the thieves snatched the chain off of Jamal’s neck and fled the scene in a vehicle.

“I was just looking around, making sure nobody was trying to get my chain. They grabbed me, tackled me down, and I tried to get back inside the gas station. They took off down Warren”, Jamal recalled.

In the surveillance video, the suspects were also punching and kicking Jamal repeatedly as he hangs onto his chain.

The gas station owner says he recognizes one of the thieves and believes those are the same men who committed a similar robbery a few months ago.