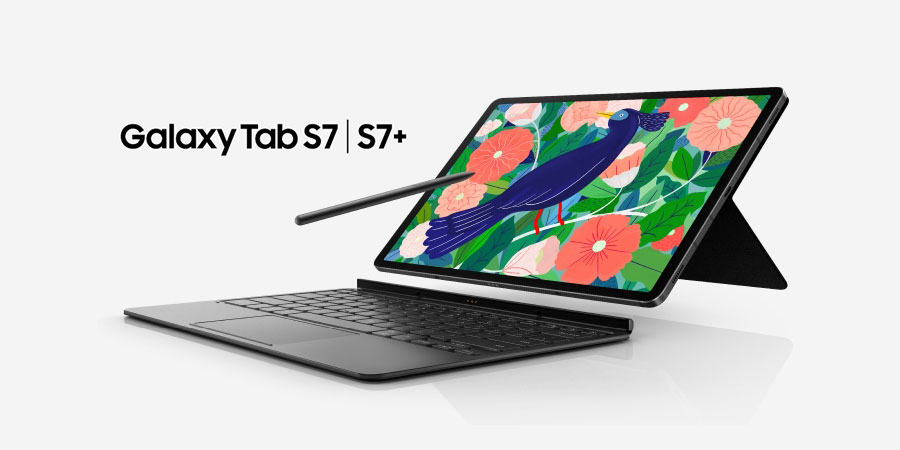 At Samsung, innovation has always been driven by the mission to equip users with the technology they need to thrive in a changing world. That’s never been more important than it is today, as people around the world seek ways to stay productive, connected, and entertained in this new era.

With the Galaxy Tab S7 and S7+, Samsung offers a 5G-enabled[1] tablet with a large screen that’s loaded with all the tools needed to unleash creativity, immersion in entertainment and elevating productivity to the next level.

Packed with cutting-edge features and seamlessly integrated into the Galaxy ecosystem, the Galaxy Tab S7 and S7+ are built to support in every pursuit—from work, to play, and everything in between. Featuring a new-and-improved S Pen, a stunning display and a suite of creativity features, these tablets offer a vast canvas for bringing ideas to life. Powerful processing, an expanded keyboard and upgraded versions of Samsung DeX allow more work to be done in less time with a PC-like experience.

A Powerful Device for Work

The Galaxy Tab S7 and S7+’s unrivalled productivity features are powered by the latest next-generation processor. The processor’s CPU, GPU and NPU deliver enhanced performance, ensuring that multi-tasking and videoconferencing is seamless when you’re on the clock, and playing a high-quality streaming game when you’re unwinding with friends after work is easier than ever.

Building on almost a decade of design and technical innovation, Galaxy Tab S7 and S7+ come with an improved S Pen right in the box. Engineered with a rounded form factor and an elongated tip, the S Pen offers a natural writing and drawing experience. Combined with the display’s refresh rate of up to 120Hz, the S Pen’s biggest leap in responsiveness[2] to date reduces lag significantly, allowing you to write with life-like precision and accuracy while taking notes.

The Enhanced Multi-Active Window on Galaxy Tab S7 and S7+ now lets you open and run up to three apps simultaneously, so you can take video calls, monitor email and take notes all at once. With App pair, you can even tie to three apps together for simultaneous launch to save time when you’re in a hurry. The Galaxy Tab S7 and S7+ also come with edge screen, similar to the feature on Galaxy smartphones, providing quick access to your most used apps.

To experience a PC-like interface on your tablet, you can use the improved Samsung DeX, with Samsung’s versatile Book Cover Keyboard[3]. This upgraded keyboard comes with an added line of intuitive function keys[4], a larger touchpad and several new angles, so that you can comfortably write, type and sketch when you’re away from a desk. The latest One UI brings a streamlined task bar to Samsung DeX. With the addition of screen zoom support and font sizing options, you can customize Samsung DeX to suit your preferences.

Samsung’s close partnership with Microsoft brings big benefits to Galaxy device users as they can sync Samsung Notes with Microsoft OneNote and Outlook. That way, not a single memo is missed on your Galaxy Note20 while working with the Galaxy Tab S7 and S7+.[5]

The Center of the Connected Galaxy Experience

Samsung’s partnership with Microsoft makes it easier for the Galaxy Tab S7 and S7+ to work with the Samsung PC. All Samsung Reminders are synced with the Microsoft To Do app[6], while Microsoft Teams tablet UI optimization[7] gives flexibility while  working or connecting with friends and family with multiple devices..

Available in three statement colors[8] – Mystic Black, Mystic Silver and Mystic Bronze – the Galaxy Tab S7 and S7+ are stylish devices that can do it all. The tablets will be available for purchase beginning August 21 in select markets.

To find out more about the Galaxy Tab S7|S7+ visit www.samsungmobilepress.com or www.samsung.com/global/galaxy/galaxy-tab-s7.

[5] The service will be available starting later this year.

[6] The service will be available starting later this year.

[7] The service will be available starting later this year.

[8] The availability may vary by market.