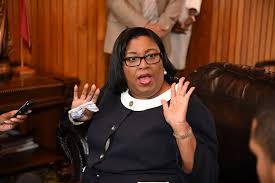 Minister of Public Administration Marlene McDonald has been arrested and detained by police, in an exercise which took place early this morning.

Her arrest comes one day after Cedric “Burkie” Burke was released from custody. He has been a close associate of hers, and was the cause of the revocation of a former ministerial appointment, after it was disclosed that he breached security in attending her swearing-in ceremony as President’s House.

Acting on instructions from the DPP, police executed a warrant for the arrest of the MP at around 4 a.m. this morning. The warrant was supposed to be issued yesterday, but the police could not find a judge to sign it. Reports indicate that McDonald is reported to be charged with misappropriation of public funds.

Reliable sources indicate that her arrest concerns the distribution of over a million dollars to several organisations by the Ministry of Public Administration back in 2008. But it is reported that the funds were not used for the purpose indicated. The Integrity Commission exonerated McDonald in 2013 and again in 2016 following the 2013 Calabar Foundation probe. But police continued their investigations.

While detained, McDonald was given breakfast as she complained of low blood sugar. She is currently at the hospital seeking treatment.  She is also seeking legal advice.