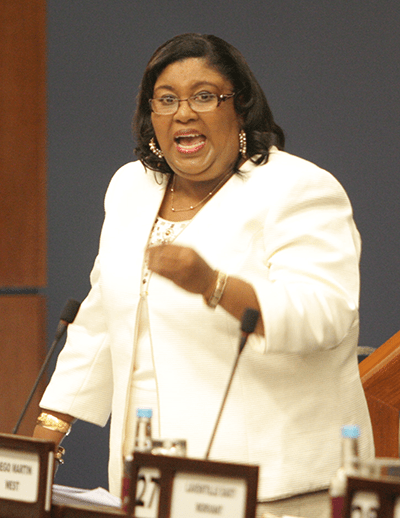 Marlene McDonald, MP for Port of Spain South, repeated her statements uttered when she left St Clair medical hospital weeks ago saying “I will be vindicated “ as she went about the business of her constituents whom she has represented for many years.

While she was fired by the Prime Minister Dr Keith Rowley as a member of his Cabinet she continues her work. IzzSo spoke to many of her constituents who firmly stand behind Ms McDonald in spite of her significant legal challenges. One woman said “we can have more time to see her now and she’s always been good to them and serves us well”.

McDonald was working on several initiatives including drives to collect school supplies for many children and families in her constituency which she has done for several years.

McDonald is out on $2 million bail which she posted after she was charged, along with her partner Michael Carew, who only recently was able to post bail of his own. Also charged was Victor McEachrane and Edgar Zephyrine. They were all charged with various offenses in relation to attempting to defraud the government of funds in 2010 for The Calabar Foundation.