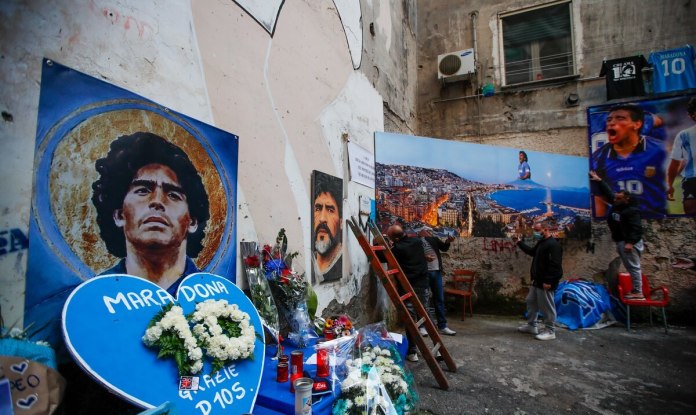 One of the three employees of the funeral home who took a photo with the open coffin while preparing the body of Diego Armando Maradona for the wake expressed his apologies this Friday, detached the company from responsibility and said that he receives telephone threats from a group of Argentinos Juniors club fans.

“We were already getting ready to take him. And they call me” skinny “, and my son, like every kid, raised his finger and they took the photo. I ask everyone for respect and forgiveness. Look, I did the service to Maradona’s father and brother-in-law , and I never did. I was with Maradona close in life. I did not do it in life knowing that he is my idol, I am not going to do it after death. It was not my intention. I know that many people have been offended and have taken it the wrong way. “, declared in Radio 10.

Claudio said that he was fired from the Pinier Sepelios company, where he had worked for seven years. And that the funeral home is a company that has worked with the entire Maradona family.

“I am receiving threats, because they know me, I am from the neighborhood. People who annoyed them. That they are going to kill us, that they are going to break my truck. My children …”, Claudio said. “I don’t want to throw anything on them, they are defending an idol,” he added.

These are some fans of Argentinos Juniors, a club in which Maradona was formed and made his debut, which is based in the Buenos Aires neighborhood of La Paternal, where the funeral home is located.

The former employee said that it was neither his intention nor that of his 18-year-old son, to take the photo, which was taken from someone else’s cell phone: “They have taken that photo and have viralized it. I have not done it in life.” he asserted, while indicating that in the past he worked at the funerals of other soccer players.

He recalled that at that time he was passing “the nerves that Maradona looks good. They took him to the Casa Rosada. And that both Giannina, Dalma, Claudia and the most intimate relatives can say goodbye to the idol.”

His job was to drive the truck to look for the body, prepare it and after leaving it at the Casa Rosada, go to sleep, when he was told that the photos were published.

“I apologize to everyone and publicly,” he insisted.

The third person in the photo was disclosed by Maradona’s lawyer, Matías Morla, on his Twitter account: “Diego Molina is the scoundrel who took a photo next to Diego Maradona’s coffin. For the memory of my friend I will not rest until I pay for such an aberration. ”

Sizing Up: Penis Size And Men’s Obsession With It 0