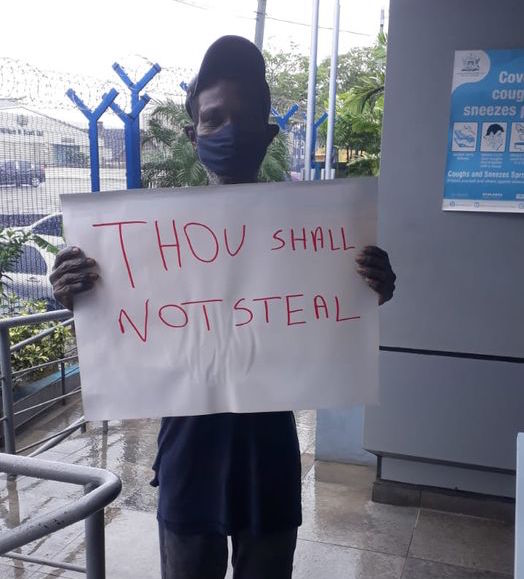 Man ordered to hold sign saying “Thou Shall Not Steal”

A 42-year-old man was ordered to hold a sign stating, “Thou Shall Not Steal,” for three days in front of the Besson Street Police Station.

STEPHAN WILLIAMS, of Ethel Street, St James, was given the order when he appeared before a Port-of-Spain Magistrate yesterday charged with attempted larceny. He was also placed on a bond which was set at $2,000 and instructed to keep the peace for one year.

WILLIAMS was arrested and later charged by PC McDavid, of the Woodbrook Police Station Criminal Investigations Department (CID), following a report made by a proprietor on May 2nd that a man attempted to steal a crate of frozen chickens.

According to the proprietor, he secured his food establishment, Texas Ranch, located along Ariapita Avenue, and retired to sleep inside around 12 am on Saturday 2nd May, 2021.
He told police that he was awaken by strange sounds emanating from outside the establishment at 7 am.

When he investigated, he saw the accused holding a long pipe attempting to remove the case of chicken valued at $3,000. The business owner raised an alarm after which the accused ran off. The police were subsequently contacted and a party of officers responded and later arrested the suspect walking along Alberto Street, Woodbrook.