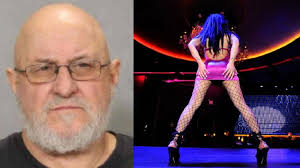 According to The Courier, a senior citizen in Waterloo, Iowa reacted to a situation in which his debit card was declined by pulling out a gun and shooting up a parking lot of a strip club. That senior citizen, 67-year-old James Allen Wells, then reportedly led campus police from the University of Northern Iowa on a chase before it ended, abruptly, with a minor car crash.

Wells was at the club around 11 p.m. on Friday, Nov. 15th, The impetus for his alleged reckless dickishness was his debit card getting turned down after he got a private dance. At that point, he allegedly left the building, drew a revolver out of his waistband, and blasted five shots into vehicles in the place’s parking lot.

The Courier reports, “One bullet hit [a] Dodge Durango in the rear window, a Chrysler Town and County was hit in the tailgate by a bullet and lodged in the back seat, and other bullets struck a Chevrolet Impala’s driver’s side door and windshield and lodged in the dashboard.”
After Wells left, he came to the attention of UNI police who tried to get him to pull over for speeding. That resulted in a short chase that concluded when he hit a curb, which rendered his car useless. After leaving the vehicle, he is said to have struggled with the arresting officers, causing one of them to injure their hand during the arrest.
Crime 2266 World 1087 #debitcard 1 #publicshooting 1 #senior 3 #stripclub 2 #unitedstates 198 #violence 17 #waterloo 1