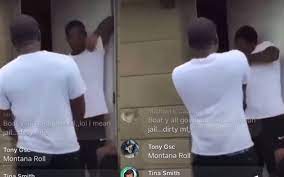 In a murderous turn of events, an American man from Houston, Texas was killed on Thursday streamed LIVE on Facebook.

The viral video shows a man approaching another man, and while the two men traded words, a weapon was pulled out and discharged several shots, into the man’s torso, with no attempt at being subtle, and before many observers. Unconfirmed media reports stated that the male victim was supposedly shot by the boyfriend of his child’s mother.