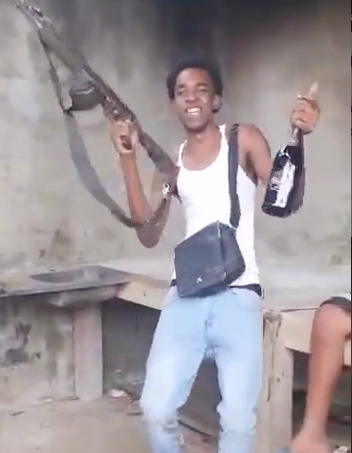 Police have detained a man, identified as Shaquille Parks, who was seen in a viral video dancing with an AK-47 rifle.

Reports are that an intelligence based exercise coordinated by Senior Supt. Aguila was conducted in the Sangre Grande District by the Eastern Division Special Operations Unit based on the recent circulation of a video on social media.

The exercise was led by Ag/Cpl Ramnarine and included PC Cielto, No PC Singh and PC Samuel.

Officers gathered intelligence and proceeded to fishing Pond, Sangre Grande where around 8:30pm, they had cause to stop a green coloured civic with Shaquille Parks being the passenger in the said vehicle.

They said Parks was searched and one Sig Sauer SP 2009 pistol with 8 rounds of 9mm ammunition was found on his person.

He was subsequently arrested and conveyed to the Sangre Grande Police Station with the exhibits siezed.

Party on the Promenade for returning TTO cyclists 0