One man was arrested and ammunition and tactical gear seized during an anti-crime exercise conducted in area east of the Northern Division between the hours of 2pm to 5pm on Wednesday 28th October, 2020.

During the exercise a search warrant was executed at the Santa Rosa, Arima home of a former member of the Trinidad and Tobago Regiment.

Officers found and seized 90 rounds of nine-millimetre ammunition, four spent projectiles, a quantity of camouflage items belonging to the Trinidad and Tobago Regiment and a quantity of tactical gear. 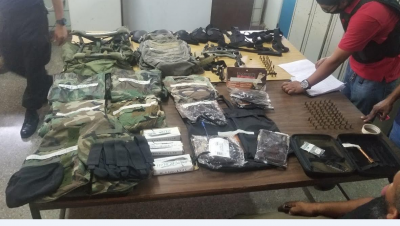 The exercise was supervised by Sgt Caldon, PC Tewarie and included a party of police officers from the Northern Division Task Force-East, Area East Ops and PC Sookoo of the Port Authority Police Department.

Loading...
Newer Post
No bail for three on kidnapping charges
Older Post
Tabaquite MP calls on the gov’t for another update on BHP Broadside Exploration Well

Over $1million in marijuana seized in Sangre Grande 0