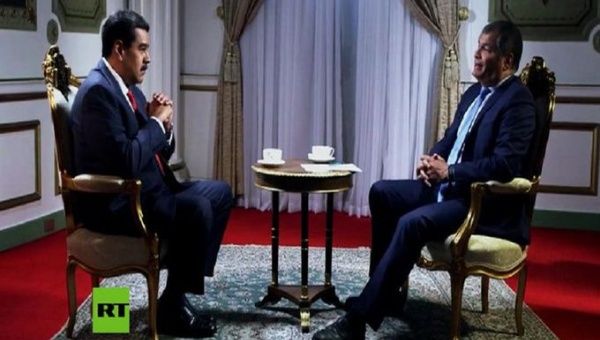 Ecuador’s former President Rafael Correaon on his RT TV Show on Thursday interviewed Venezuela’s President Nicolas Maduro at the Miraflores Palace in Caracas, where both critically addressed the complex realities the Bolivarian Revolution is currently facing.

During their one-hour conversation, those leaders of the contemporary Latin American politics talked about the economic and social situation of Venezuela, which, as Correa said, is “victim of a disinformation campaign” whereby political opposition tries to get benefit from problems that have been “clearly caused by the so-called ‘sanctions’ which are actually illegal aggressions against sovereign countries.”

In order to highlight the effects of the U.S.-led economic aggression, President Maduro recalled that from the beginning of President Hugo Chavez’s administration in 1999 up to 2015, “we had annual revenues of US$50 billion from oil sales. Now we only receive US$4 billion.”

Maduro also mentioned that the death of Commander Hugo Chavez in March 2013 meant a “very big blow” for his country because “internal enemies, but especially the U.S. imperial power, began to design tactics to replace Chavismo.”

During the presidency of Donald Trump, over the last two years, “the war with Washington has had a devastating effect on our social stability and people’s lives,” the United Socialist Party of Venezuela (PSUV) leader said.

“Venezuela cannot either open or close international bank accounts. It cannot pay for any type of product. In addition, we are now being threatened with a complete naval blockade.”

In his talk with Correa, the Bolivarian president once again denounced that the U.S. government actions imply many financial costs to the Venezuelans. “They have confiscated and robbed us of almost US$30 billion,” Maduro said and explained that Venezuela is living “an economy of resistance.”

In order to tackle this situation, his administration has established priority policies, one of which is food and medicine production. This goal is “at the center” of those priorities so as to be able to supply the population.

“Venezuela has no sanctions, it has aggressions,” Maduro said and added, “Trump has kind of AN obsessive hatred against Latin American peoples, refugees, immigrants; he has a special hatred against the Venezuelan people and our history.”

“I compare [what happens now] with the Hitler era, with that same vision that Hitler imposed against the Jews before the war,” he stressed.

Based on the challenges it faces at the current ​​​​​​​historical moment, the Venezuelan government is laying the long-term foundations to overcome the country’s traditional dependence on oil revenues.

“I have defined 16 ‘development drivers’ on the basis of our country’s economic, industrial and technological realities,” Maduro said and recalled that transforming a natural resources-based growth model, which has been in place for the last 100 years, is a difficult task.

Nevertheless, “despite all imperial aggressions, we are standing still and ready to resume the path towards growth”, President Maduro said.​​​​​​​

Physical reopening of schools had some challenges 0