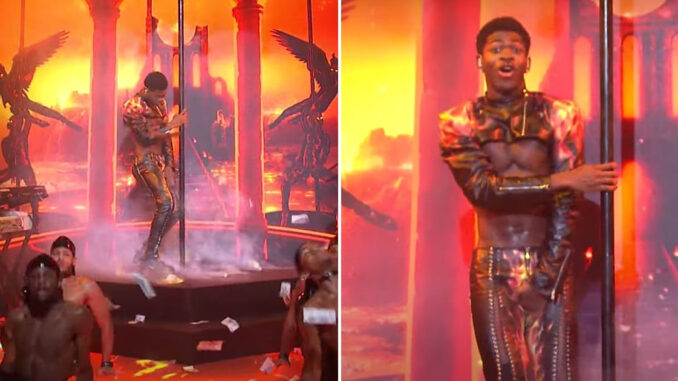 Lil’ Nas X keeps pushing the envelope and stirred up many conversations with his first performance of ‘Montero (Call Me By Your Name)’ on the SNL stage.

This is his 1st performance of the chart-topper and the SNL’s first taping before a full vaccinated audience.

The sultry, super salacious performance with shirtless dancers in leather pants was choregraphed by the famed Sean Bankhead.

Nas X appeared onstage with the stripper pole to hell that caused him to go viral. The stage became his hell, wings on display as a backdrop. With the performer wearing leather pants, a phalanx of backup dancers joined him. The performance quickly became a mass of perfectly synchronized writing, sweaty bodies.

At one point, LNX was having his face licked, and then at another, he approached the pole — likely in order to take a spin. He then grabbed his crotch and kept a hold of it while keeping most of his movements pretty restrained. It quickly became clear that his pants had ripped. This is what we call a professional, X kept the titillating performance moving!

Loading...
Newer Post
Bermuda’s donation of 9,000 AstraZeneca shots due to arrive in TT this afternoon
Older Post
Unclassified UFO Report to Be Released by the U.S.