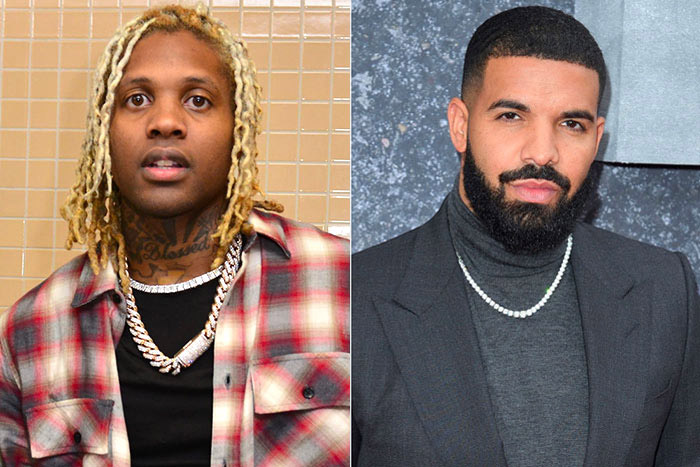 Lil Durk is laughing to the bank after getting his Drake stimulus.

The Chicago rapper is at the height of the game, and it hasn’t been without help and support from his team and an unlikely source- Drake. While on the Million Dollaz Worth of Game Podcast, the Chicago rapper detailed the moment his status moved from a low-earning rapper to being a six-figure rapper.

At the height of the pandemic, Drake and Lil Durk collaborated on their 2020 track “Laugh Now Cry Later,” which peaked at No. 2 on the Billboard Hot 100. The song gave Durk his highest-charting single but also transformed his career.

According to Durk, that song was a defining moment for his career.

“I don’t care like the next song could be hot but like that don’t mean your price goes up. We was debating a long time like should we go to sixty. [while] in the studio right, this mother***** come through the DMs like ‘send your number’,” Durk recalled Drake reaching out.

“When he said DM his number, I’m like… he sent the song through, I called everybody, ‘we rich’ it’s over with’,” the Chicago rapper said.

Lil Durk says his booking fee went from 40K to 100K, as did his music and streaming.

Last year the rapper announced on Twitter that his booking fee was $200,000 for an event, a far cry from the $40K he started with.

“Shout to Drake though he definitely helped a mother****** out,” the OTF rapper said.

Durk was also featured on Drake’s ‘Certified Lover Boy’ album released last year and has been featured on a number of shows and events.

Despite Drake helping his career to rise, Durk, however, thinks that he is bigger than Drake to certain rap demographics.

He also rated Drake for always being willing to work with smaller artists.

He added, “I’m in this muth****a, in the middle of the trenches with a million dollars doing a f***ing interview, that’s why.”

In the meantime, Drake might be bringing along others for the success he has been enjoying, but he remains the highest-streamed artist for 2022, according to Chart Data. The rapper had 1.4 billion streams up to March, but he ironically is closely followed by Durk’s rival NBA Youngboy, who has 1.3 billion streams.