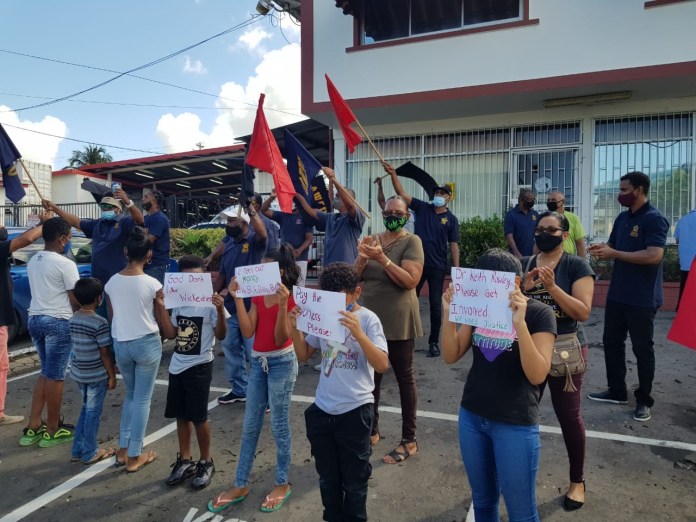 Workers of Lennox Petroleum kept good on their promise to continue with protest action.

The workers brought their family members to assist in their call this morning, as they demand their back pay, which they say has been owed since November.

However, Lennox Petroleum said it has made various attempts to resolve outstanding issues with the workers representatives—the Oilfields Workers Trade Union (OWTU)—but the union has failed to respond to their overtures.

In a media release today, Lennox Petroleum had the following to say:

1. Lennox Petroleum Services Limited (LPSL) Management would like to address the ongoing, widely publicized OWTU member protests. These labour protests have taken place at our LPSL offices, as well as the private residences of two of our respective LPSL staff members and are of great concern.

2. The current labour dispute litigation process is ongoing. LPSL’s legal team has applied for an interpretation of the Court Order. Since the OWTU failed to present any evidence before the Court to determine the following:
a. Who are the workers to which the judgment relates?
b. How much money is owed?
c. What is the specific time period for which the workers are claiming interest?

The LPSL legal team has taken concrete steps to resolve the said labour dispute in an amicable manner. LPSL has written to the OWTU in good faith, in a letter dated Tuesday 8th December, 2020. The letter was a request for a meeting facilitated by: an Industrial Court Judge (conciliation).

To date, LPSL has received neither a formal response to the letter, nor a request to meet with the OWTU, under the supervision of an appointed Industrial Court official.

3. The formal LPSL letter requesting a meeting with the OWTU was sent via email to the OWTU mailing address and hand delivered to the Union Hall headquarters. To date, the OWTU has not responded to multiple requests by the LPSL legal team for a formal in-person meeting. Instead, individuals wearing OWTU branded clothing, and waving flags continue to be stationed outside of our LPSL offices and private residences, demanding a meeting with someone from the company, as a public show of defiance.

4. Multiple press articles, and video interviews with individuals wearing OWTU branded clothing have stated that LPSL was paid, and owes $9.5mil USD to the protesting workers. These public statements by protesting workers are factually untrue.

5. The LPSL legal team has applied to the Court for clarification of the sums owed under the Order. Since, LPSL will have no way to recover any monies if, individual workers are overpaid.

6. The on-going protests by OWTU labour members, under the guise of forcing a meeting with our staff are disingenuous. Since, the LPSL legal teams has offered to meet with the OWTU, and are willing to do so, under supervision of an appointed official of the Industrial Court. The protesters are aware that the LPSL CEO is not in the jurisdiction and continue to protest in front of his family residence to intimidate the LPSL CEO. This form of intimidation and harassment is no way to resolve the said labour dispute in an amicable manner. Furthermore, the protesters who showed up at the family residence of our LPSL female staff member (who was at work at the time), only served to intimidate and make her family in fear for their lives.

7. Clearly, the actions of harassment and intimidation by the protesters towards our LPSL staff and their respective families are completely unjustified. Since, the labour dispute is on-going and in the Courts. T&T law prescribes means for the enforcement of judgments that are not paid. Thus, failure by the OWTU to put before the Court the amounts which they claim to be owed, in the court order dated: Wednesday 8th July, 2020, cannot be enforced by the proper legal means. Thus, individuals donned in OWTU branded clothing have taken to enforcing the judgment by unlawful means. These labour protests are illegal and must “cease and desist” immediately!

Suspect in the murder of a couple is found dead 0

Did you know T&T officially became a Republic on August 1? 0