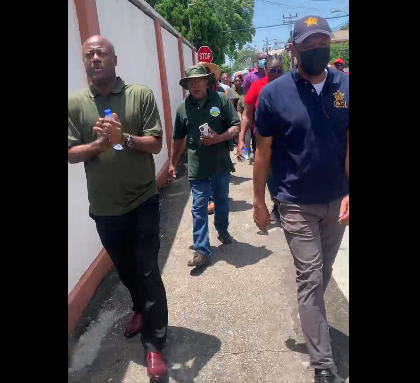 “We are not afraid to go to court.”

Those were the words of Ceron Richards, President of the Prison Officers’ Association, during a march in Port of Spain on Friday, outside the Chief Personnel Officers office.

Richards, along with members of his association and that of the Fire Officers’ Association, the Police Social and Welfare Association and the Joint Trade Union Movement (JTUM), were demonstrating against the CPO’s 4 percent offer.

They also delivered a letter rejecting said offer and cited their reasons for doing so.

Richards said: “We still have discussions ensuing and the CPO is bullying his way, telling us he is going to carry us to court. We are not impressed about that at all. As a matter of fact, we are telling the CPO bring it on! I dare you, bring it on!”

“Tale the whole country to court, all the workers of Trinidad and Tobago, take them to court! Because if that is the Government’s rendition of managing an economy, well heaven help them. If the Government wants to take T&T to court, if Dr Keith Rowley, Mr Imbert, the CPO rendition of managing a good economy is by taking all of its citizens, all of the working class, to court, well then let them bring it on!” added Richards.

He noted, “The Prison Officers’ Association has always communicated to the CPO that what we want first and foremost, is a negotiation that is not robbed of its integrity. Negotiation is an onward discussion between both parties and we will reach a point at some time where we agree and go forward. The CPO and, by extension, the Government, is robbing us of that sacred process.”

Richards said his membership is getting angrier and further action from the union may come.

JTUM president Ancel Roget said: “It is not just that the offer is unfair, it is also disrespectful and the method by which they are approaching it is highly contemptuous and bullying. To accept four per cent will be a betrayal of the members. If anyone of these comrades of the leaderships of anyone of the protective services accept four per cent, it will be a betrayal of the trust and the confidence that the members reposed on them.”

Loading...
Older Post
Fisherfolk plead for flare guns and other safety measures in wake of deadly robbery at sea