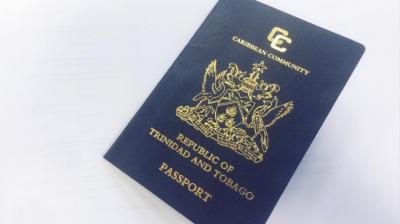 A new passport delivery service has been introduced by the Ministry of National Security’s Immigration Division, ushering in a modernized approach to passport services, consistent with Government’s thrust to improve  public service delivery.

Speaking at the brief event, Minister Young indicated that when he assumed office as Minister of National Security in August 2018, he advocated for an immigration system upgrade which commenced in April 2020 and is ongoing, as well as the enhanced provision of immigration services.

Members of the public are asked to take note of the following procedure with regard to passport services which will be implemented with effect from September 28, 2020.

·         Prior to their appointment date, persons applying for a passport will be required to visit one of the designated TTPOST outlets to purchase an A5 TrackPak. The list of TTPOST locations offering this facility can be accessed on the Ministry of National Security’s website, via link http://www.nationalsecurity.gov.tt/Divisions/The-Immigration-Division. The list of locations can also be accessed on TTPOST’s website www.ttpost.net.  The cost of the TrackPak is twenty-five dollars ($25.00). TTPOST officials will guide persons on how to self-address the TrackPak (address at which the passport is to be delivered).

·         For persons with confirmed passport appointments from September 28, 2020 onward: The applicant will be required to visit the Immigration Division office at which the appointment is scheduled and should bring the A5 TrackPak, along with all the required documentation to apply for a passport (see list of required documents at https://www.ttpassport.info/faq). Immigration officials will guide applicants on how to self-address the TrackPak.

·         For persons who have already made a passport application prior to September 28, 2020: Visit one of the designated TTPOST locations to purchase two A5 TrackPaks at twenty-five dollars ($25.00) each, a total cost of fifty dollars ($50.00). One TrackPak should be addressed to the    Immigration Division and used by the applicant to enclose the application receipt for the passport, the current passport held by the applicant (as this has to be cancelled) and a completed Third Party Authorization Form. The Third Party Authorization Form can be downloaded from the Ministry of National Security’s website, via link http://www.nationalsecurity.gov.tt/Divisions/The-Immigration-Division, or obtained at one of the designated TTPOST locations. The other TrackPak is to be self-addressed for delivery of the applicant’s new/renewed passport and the return of the cancelled/expired passport (which will no longer be valid).

·         All applicants are asked to note that a TrackPak will be required for each application as only one passport will be included per TrackPak, in keeping with international best practice.