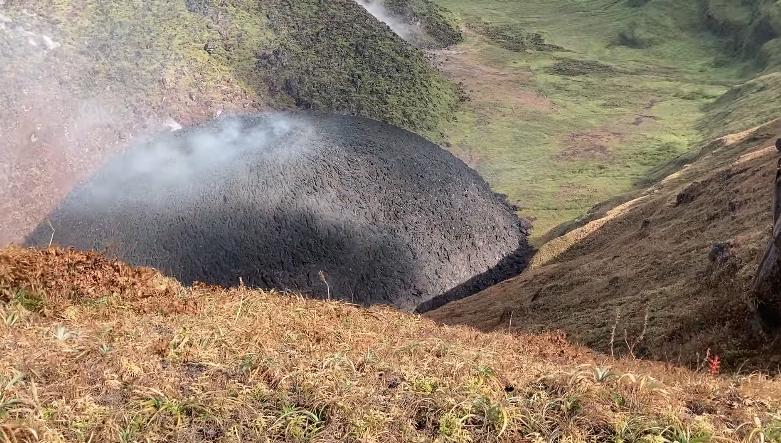 UWI’s Seismic Research Centre has reported that the dome at the La Soufrière volcano in St Vincent is growing.

Based on their update on Sunday evening, UWI SRC stated that weather conditions did not allow for a reconnaissance flight on Saturday 9th January or Sunday 10th January, 2021, however analysis of footage collected from a drone flight over the volcano indicate that the dome continues to grow.

The dome that broke through the crater floor, on December 27, 2020, on the south-west perimeter of the existing dome, continues to grow within the crater of La Soufrière and has an ellipsoid shape with growth expanding in a westerly direction.

UWI SRC said the alert level remains at Orange as the volcano continues to exude magma on the surface and steam can still be observed from the Belmont Observatory.

Persons living in areas close to the volcano should expect strong sulphur smells for several days to weeks, depending on changes in wind direction.

Two scientists from the Seismic Research Centre (SRC) based at the Montserrat Volcano Observatory (MVO), Dr. Thomas Christopher and Dr. Adam Stinton, will join the current team in St. Vincent later this week. They are expected to gather data from the dome and crater through temperature and photogrammetry measurements and gas measurements using a MultiGAS and spectrometer.

The Caribbean Disaster Emergency Management Agency (CDEMA) is finalising helicopter support for the Seismic Research Centre (SRC) Team to install equipment and collect samples from the summit of the volcano.

The SRC Team commenced installation of Seismic station in Owia Sunday and will continue installation in Fancy and areas closer to the volcano during the course of this week.

The continuing hotspot anomaly being recorded by NASA FIRMS results from the presence of the new dome. Satellite imagery obtained through the Monitoring Unrest from Space (MOUNTS) Project indicate that the dome is detectable by orbiting earth satellites.

The National Emergency Management Organisation (NEMO) has suspended all face to face community meetings to update residents on the present state of La Soufriere Volcano until further notice due to the revised protocols for mass gathering implemented by the Health Services Sub-Committee of NEMO. Information to communities will be communicated virtually.

NEMO continues to appeal to the public to desist from visiting the La Soufriere Volcano until the scientists advise that it is safe to do so.

Arima man gunned down at home 0