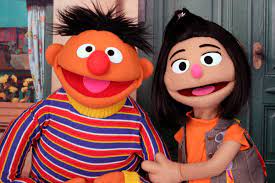 Korean American puppet to join the cast of Sesame Street

A Korean American puppet named Ji-Young is making history as the first Asian American Muppet to join the cast of Sesame Street.

The 7-year-old character will make her debut as part of the upcoming show See Us Together: A Sesame Street Special.

The show is scheduled to air on Thanksgiving.

Alan Muraoka, who plays the owner of Hooper’s store on the show, told NBC Asian America that Ji-Young would straddle two cultures while embodying a modern American girl.

“She’s a musician, she plays electric guitar, she’s a girl of the very modern American fabric,” he said. “She recognizes the culture through her relatives — her grandmother, through her mother — and through the food she eats and loves.”

The special intends to celebrate “the rich diversity of Asian and Pacific Islander (API) communities as part of the organization’s ongoing racial justice initiative.” It will also offer an opportunity to discuss anti-Asian racism.