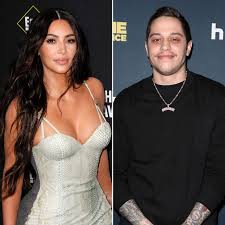 As it was previously reported, after Kim appeared on SNL with Pete Davidson where the two shared a little kiss, they recently hung out at Knott’s Scary Farm on Friday with a group of friends that also included Kourtney and Travis Barker. Kim and Pete were also seen holding hands together while riding a roller coaster.

The two met back up on Tuesday for a little private dinner at Campania restaurant…one of Pete’s favorites in Staten Island. While sources have claimed that they are just “friends,” it was said that they went out again, and now fans think there’s something more going on between the two.

According to TMZ, for the second night in a row, K&P joined a group of friends for dinner at Zero Bond in NYC. The pair arrived separately. Pete showed up first and then Kim, dressed in Balenciaga, arrived about 10 minutes later.