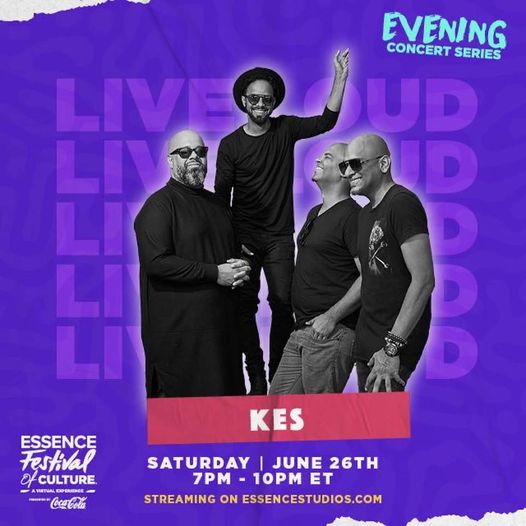 Kes the Band is set to make history this weekend, as the only Caribbean act selected to perform on Saturday night at the 26th Essence Festival of Culture.

For the band of brothers from Trinidad, the festival represents a golden opportunity to showcase their talents as well as the “vibes” of Trinidad and Tobago to a captive, significant and influential American audience:

“Our mission has always been to spread the music and vibrations as far and wide as possible.” Said lead vocalist, Kees Dieffenthaller. “Being a part of the Essence Fest line-up this year gives us the opportunity to share our energy through the music and culture of our beautiful islands, Trinidad and Tobago. So we want everyone to log on, get up and dance and enjoy the infectious energy of soca and calypso music.

“Our goal for this year’s festival,” explained Loreal Lemond, Ashaunna Ayers and Jameel Spencer of the Essence Fest Talent Team, “was to procure talent and creatives globally, who represent their communities – and in this case their country and genre – in a way that is aligned with Essence Festival’s mission and purpose.”

So why exactly was Kes chosen to perform on Saturday night then? Well, it’s the vibe of course!

“Essence is always on a mission to celebrate all aspects of Black Culture and we are happy to have Kes represent for the international community with a performance that will surely make his home country proud!” Stated Essence Fest’s VP Experiential, Branded Content & Video, Stephanie Dunivan.

While 2020 sidelined live music , the band of brothers remained creative and continued to open doors for Soca music amidst the pandemic, as they produced and presented three live streaming concerts in 2020 and were featured on several mainstream media outlets in the US and the UK in the lead up to those aforementioned concert performances.

Now, with the virus seemingly at bay to a greater extent, the band is gearing up to resume their mission of bringing their music globally.

“We had a fabulous tour planned,” explained one half of the band’s management team, Damon DeGraff, “but the universe clearly had other plans for everyone and we took the extra down-time to not only push the envelope in terms of live streaming presentations, but to also craft a new body of work which we consider to be the soundtrack of the future.”

The Essence Fest performance line up includes notable names such as: DJ Khaled and friends, Davido, Jasmine Sullivan, D-NICE, NeYo and others. To witness Kes’ groundbreaking performance at Essence Festival this Saturday night from 7 – 10 pm, please log on to www.essencestudios.com