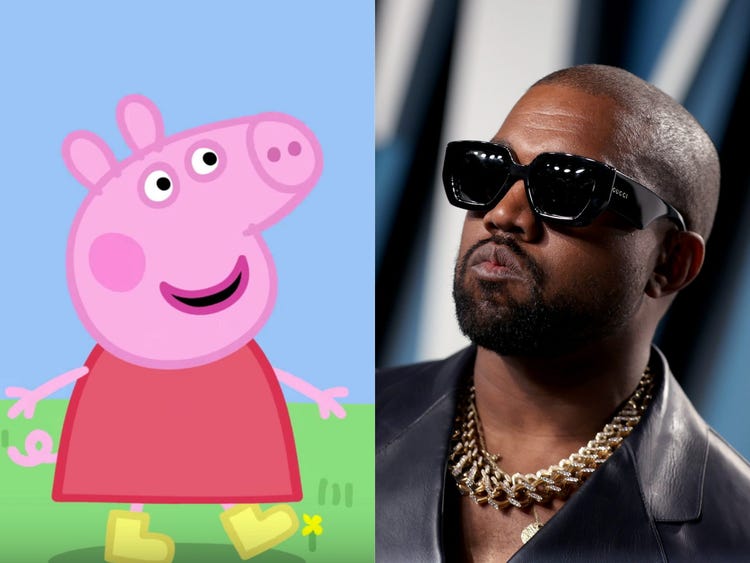 The British cartoon character — star of the hit animated series of the same name — joined social media commenters in poking fun at West’s newly released Donda after Twitter users noticed Peppa’s Adventures: The Album got a higher review from Pitchfork.

Last month, Pitchfork gave Peppa’s sophomore album a 6.5 rating calling it a “charming and self-assured celebration of family, friendship, and muddy puddles.” As for West’s project, the outlet issued a 6.0 rating, saying the “album arrives barely finished and with a lot of baggage.”

In a since-deleted tweet on Wednesday, the official Peppa Pig Twitter account reposted a fan who put the album reviews side by side. “Peppa didn’t need to host listening parties in Mercedes-Benz Stadium to get that .5,” the account commented, referencing the Donda listening party in July.

In addition to the album review, West’s album has stirred up a lot of controversy.

Ahead of the album’s release, West held a listening party — during which he welcomed Marilyn Manson onstage at Chicago’s Soldier Field. Manson’s appearance left fans feeling upset as the disgraced rocker is facing four sexual abuse lawsuits and has been accused by more than 15 women of sexual assault. DaBaby, who apologized last month after making misinformed comments about the LGBTQ community and HIV, was also present at the event, performing his verse on the song “Jail,” which seemed to replace JAY-Z’s surprise verse.

Following Donda’s release, revelations about the rapper’s marriage to Kim Kardashian appeared to come to light. The rapper seemed to suggest he’d been unfaithful in the lyrics to his new song “Hurricane” — and, according to a source close to him, he feels remorseful about the pain caused his estranged wife.

“There were things that happened in their marriage that Kanye regrets. He wasn’t always the best husband,” the source tells PEOPLE. “He knows that he hurt Kim. He will always love her though.”

The Keeping Up with the Kardashians alum, 40, filed for divorce from West in February after nearly six years of marriage and four children: daughters North, 8, and Chicago, 3½, and sons Saint, 5½, and Psalm, 2.