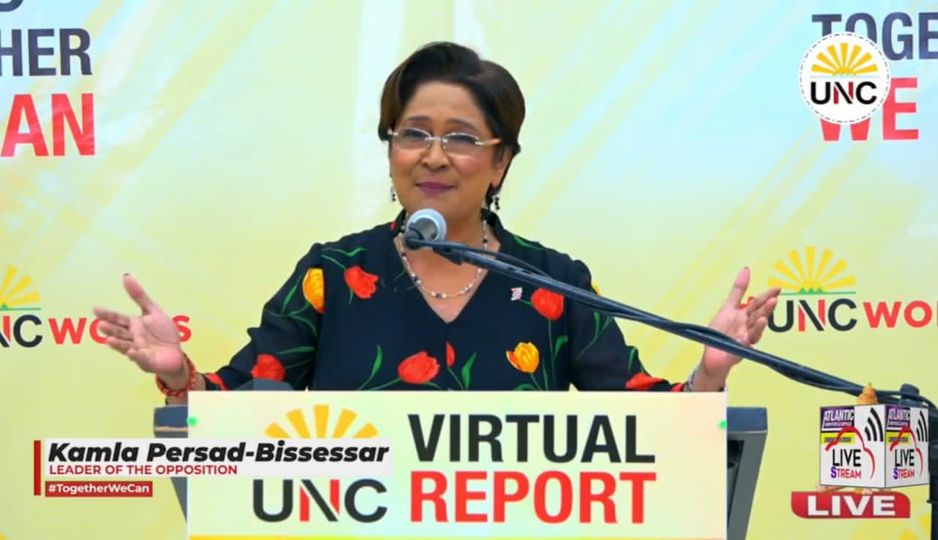 Kamla: You cannot have the key lawmaker in your gov’t breaking the law

Opposition Leader, Kamla Persad-Bissessar slammed the Attorney General during her party’s Virtual Report on Monday night, saying that he has no respect for the law, even the laws that he has created.

She said “Faris has been making laws for us citizens to wear masks in our vehicles with big fines if we fail to do so. But he has no difficulty, no issue, no problem attending a game show because according to him it was like “sitting at a restaurant.”

The UNC leader said “Faris, the AG who made the law for everyone cannot respect the very law he made. Does he not believe in his own law? His own words do not make sense to him?
Well that wouldn’t be surprising because he keeps bringing flawed legislation to parliament and we have to fix it.”

She said what was even worse was his Leader’s reaction.
She said “the Attorney General broke his own law, but all Keith (Rowley) could say was that he was disappointed? So what now, Faris goes in the naughty corner?”

Persad-Bissessar said “in my Cabinet, an infraction like this – the culprit would’ve immediately been fired.
But like Faris has something on Rowley? So he would keep defending him? Keep making excuses for him? A rap on the knuckles and an expression of disappointment?”

She pointed to an incident in Bermuda, where two of Bermuda’s leading cabinet ministers resigned over breach of Covid-19 rules.

Persad-Bissessar said “Well Rowley we are not just disappointed in you, you are a total failure, total incompetent and you should fire Faris.”
“You cannot have the key lawmaker in your government breaking the law. And nothing happens. What is the example set for the rest of the country?
Rowley should fire him forthwith.
This is the unmasking of the Rowley government. Government has no intention to reopen the country. They are living nice in lockdown. The lockdown laws are for you – not for Faris, Rowley and his team.”