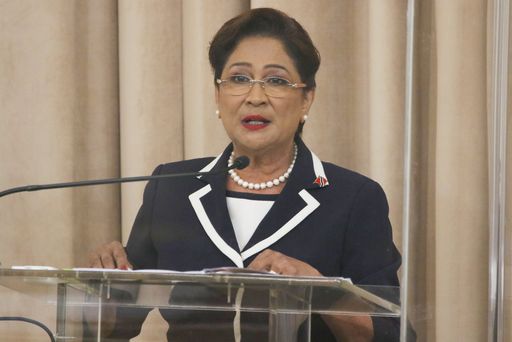 Kamla tells Deyalsingh “Stop the theatrics and do your job”

Opposition leader, Kamla Persad-Bissessar said Health Minister Terrence Deyalsingh must stop the ‘ole’ talk and do his job or step down.”

This follows Deyalsingh’s statement during the Senate on Tuesday, in which he said that TT could reach herd immunity in a matter of months, if the UNC would stop undermining government’s vaccination efforts.

She said in a Facebook post, “At a time when this nation needs stable leadership to help us prevail through this crisis, Deyalsingh’s rants are totally irresponsible.

“It is unbecoming that the Minister of Health has resorted to divisive political games as opposed to answering the valid questions on the safety of some vaccines which were brought on by the numerous reports in the international media.”

“For 14 months, Deyalsingh, led by Prime Minister Keith Rowley, bungled the management of the COVID-19 crisis. It is a direct result of his failure to heed the CMO’s warning regarding the spike before Easter, and his leader’s invitation to the population to go to Tobago, as well as their inability to secure our borders, that we are in the dire situation we are in today.”

“We also remind Deyalsingh that since January of 2020 we were warning the Government about the threat of COVID19, yet their own PNM Speaker of the House refused to allow the debate saying that it was not urgent.”

The United National Congress maintains that the only way to solve this health crisis is the acquisition of enough COVID-19 vaccines and a comprehensive vaccination program for the people of Trinidad and Tobago. “The Rowley administration failed to act quickly in securing adequate supplies of vaccines and appear to be relying on donations and COVAX only.
The responsibility for acquiring vaccines lies solely on the government and they must act now.”

The Opposition leader said “Government must accept that they alone cannot get us out of this pandemic as they have had more than a year to show us their plans. They have failed from the onset by denying the urgency of the pandemic and they continue to fail by coming every day, at every media conference to blame citizens and the Opposition for their own incompetence.”

“The Government must work with all stakeholders to overcome this as Deyalsingh admitted they do not have all the answers. We urge the Government, end the divisive politics and let us work together as the welfare of our people depend on it.”