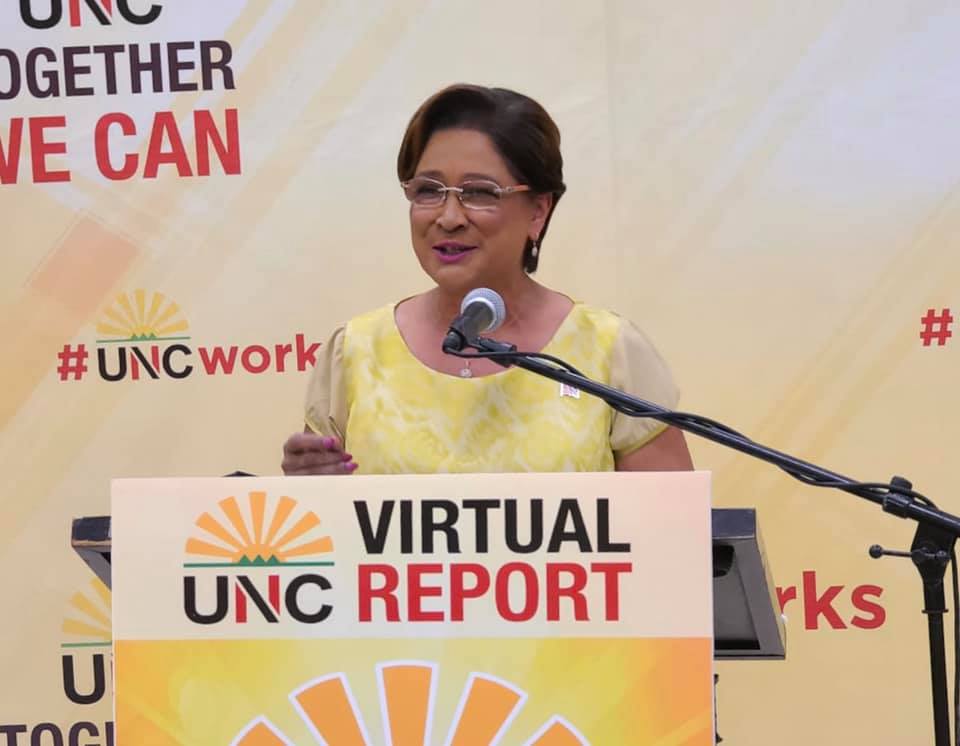 Opposition Leader Kamla Persad-Bissessar has slammed the Prime Minister’s arrogance in seeking Covid19 vaccines for the citizens of Trinidad and Tobago.

She said “He cannot find it in his heart to do what he calls ‘begging’ and he’s branded all Caricom prime ministers (whose countries got vaccines) as beggars.”

Persad-Bissessar asked “Would you beg to save your daughter or son‘s life? If you don’t do that, you’re not a father.”

She accused Rowley of “buffing” US officials, the Indian High Commissioner and local business people.

And she ‘dissed’ his claim about a private sector organisation wanting “tax breaks” to bring in vaccines.

Reading excerpts from the statement from the ANSA McAL Group, Persad-Bissessar said “This is a slap in the Prime Minister’s face.”

She said it was noted that at a February 17 meeting, the Health Ministry asked top business leaders to fund vaccines and public vaccinations of citizens. She said it was stated that the next day, an ANSA McAL team had a conference call with Health Minister Terrence Deyalsingh and top health leaders and he described an urgent situation where Government had negotiated direct purchase of 351,000 doses from Pfizer for US$8.4 million and was required to confirm the order the next day or would lose it.

She said the group was told any contribution from ANSA McAL would be appreciated.

Persad-Bissessar said the group stated it would fund the entire cost of the 351,000 doses. All would be used to vaccinate citizens and none was to be retained by ANSA McAL.

The Group asked that Government allocate sufficient Forex for them, in light of the current forex issues, to pay for the vaccines in a timely way. It was also requested that the contributions of all private sector entities buying vaccines for use to vaccinate the public be credited against tax payments for 2021.

Persad-Bissessar: “(The PM) said they wanted ‘tax breaks’ but they said credit us against the taxes, that’s different from a tax break. If you’re credited against the taxes you have to pay it. But a tax break will mean no taxes paid.
“They didn’t ask for tax breaks, they’d said they were paying their taxes upfront—prepaid. Government wanted the vaccines but had no money to buy, so they beg!”

She said the group’s statement also indicated two weeks ago that it alerted the Health Ministry that it secured access to doses of another approved vaccine and planned to buy 100,000 in the first instance. Fifty per cent would go to Government and the other 50 to group employees/immediate families, some sold to private health systems and there were also plans to partner with other consortiums who wanted to vaccinate their people.

She said the group was aware government help was needed to consummate the plan and required documentation for entry of vaccines. It was stated they were awaiting information from the supplier to present to Government.

Persad-Bissessar said “Why this ego trip? Talk with ANSA McAL! After this I don’t know if they will still be your friends.”

16 More Test Positive For The Covid19 Delta Variant, Says The Ministry Of Health 0

Four More Deaths From Covid-19, 1633 Overall In Trinidad And Tobago. 0