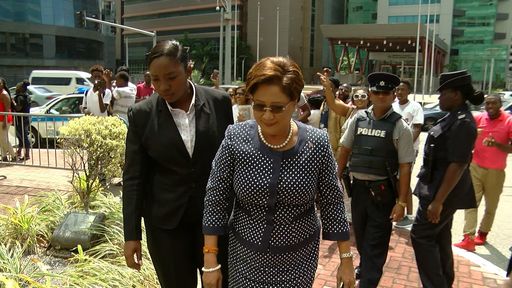 Kamla says UNC will save the country in a yellow canoe

Opposition Leader Kamla Persad-Bissessar said she will rescue Finance Minister Colm Imbert in a yellow canoe, similar to how the UNC party will rescue the country from the PMN.

Persad-Bissessar engaged in banter as she made reference to a photo of Imbert that went viral yesterday, which showed the Minister backed against the wall as a semi-circle of flood waters blocked his path. She said thousands of citizens are reeling from flood waters and the Minister knows as he was marooned in the flood.

Persad-Bissessar said thousands of citizens are suffering from lack of water, over 22% of the population are reportedly living in poverty, and are still unsure of where their next meal is coming from. She added that 63,000 persons have lost their jobs while business confidence is at an all-time low.

Persad-Bissessar made mention of the UNC’s National Economic Transformation Plan, a booklet which includes the plan that the UNC has for the country.

Beyonce ‘Likes It Hot’ In These Fiery Red Outfits 0