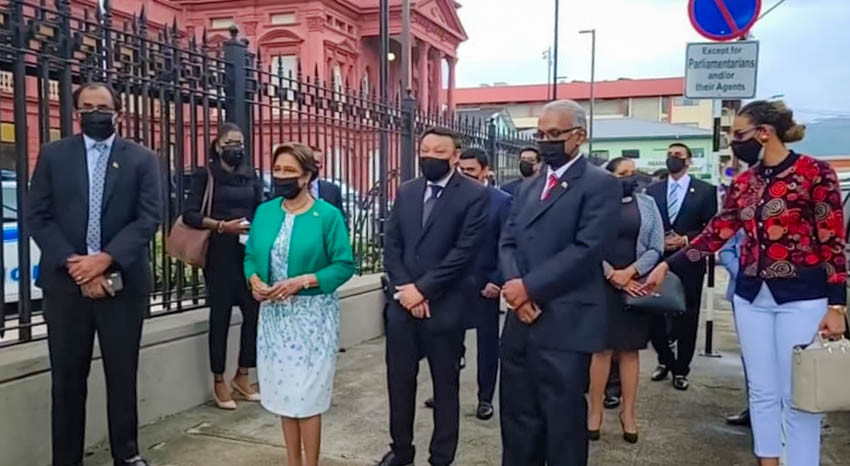 UNC leader Kamla Persad-Bissessar, said the Opposition walked out of Parliament on Tuesday to stand for democracy, as the Government continued its pattern of abuse of the practice and procedure of the House of Representatives.

She said there were two major breaches to the Standing Orders which led them to take such action.

Persad-Bissessar noted, “At Monday’s sitting, the Leader of Government business moved to waive the Standing Orders, without the agreement of the Opposition, to create their own speaking times for the debate on the motion to adopt the report of the Joint Select Committee on Tobago Self Government.

“The Government moved that the first speaker would have two hours, with the first responder given equal time, and thereafter, one speaker for 90 minutes on either side, one for 60 minutes on each side and the remainder for 20 minutes, with 60 minutes for the wind up of the debate. Notably, the Leader of Government Business stated clearly that there would be no extensions.”

She added, “The Prime Minister was clearly afraid of any other Opposition Member responding to him as we highlighted over the course of the two days how this bill does not serve the best interest of the people.
Just as he refused to listen to the people of Tobago, he refused to listen to any other Members today. His actions are indicative of a coward and a bully, who can only shout and run away. ”

Persad-Bissessar said this was “another dark day for our nation and our democracy, as the Parliament was reduced to a PNM circus. It is because of this abuse of the Parliament we the Opposition decided that we will report to the people from the pavement instead.”

The Opposition, she said, will continue to seek the interests of the people of Trinidad and Tobago.