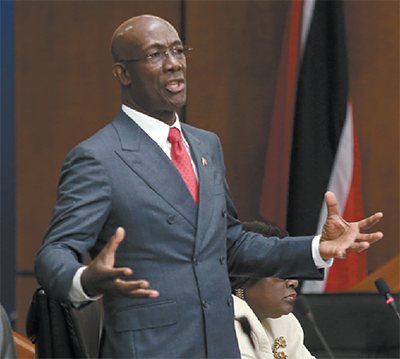 During a House Sitting on Monday night, Prime Minister Dr. Keith Rowley shocked fellow MPs in the Parliament Chamber when he said that Opposition Leader Kamla Persad-Bissessar knew that Port-of-Spain MP Marlene McDonald was to be arrested, and warned her of such.

McDonald then confirmed the Prime Minister’s statements, adding that Persad-Bissessar told her four-to-five weeks before being “locked up” that her arrest was imminent. The Prime Minister added that he, as Chairman of the National Security Council, did not know of McDonald’s arrest but that Persad-Bissessar did. The Opposition Leader was not in the Chamber at the time to defend herself. During his con­tri­bu­tion on the Firearms (Amend­ment) Bill 2019, the Prime Minister added that he had information that the Opposition Leader, during their her time as Prime Minister in the People’s Partnership Government, even offered McDonald the prospect of a Se­nior Coun­sel position. Dr. Rowley was noted as stating on Monday, “Is be­cause we have cred­i­bil­i­ty that I as leader could have told my col­league you do no such thing and you take no silk from them un­less is a silk twine to hang them­selves.”

On Monday, McDonald appeared in Court to answer the seven charges laid against her including con­spir­a­cy to de­fraud, mis­be­hav­iour in pub­lic of­fice and mon­ey laun­der­ing. The charges were laid indictably and the matter was adjourned to November 4 at which time the State is expected to submit 22 witness statement against McDonald and her companions Michael Carew, Wayne An­tho­ny, Vic­tor McEachrane and Edgar Zepher­ine.

In total, they are charged with 49 offences.