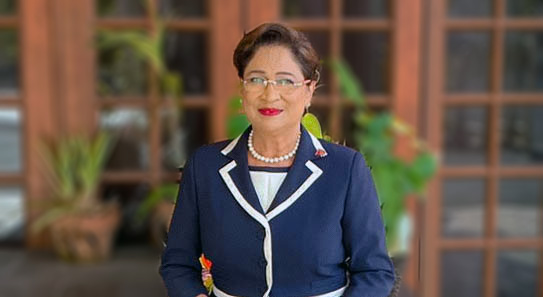 Kamla appeals for justice for mothers of abused children

Opposition leader Kamla Persad-Bissessar is calling on all mothers to join together in one voice and demand that the children who have been abused under the care of this government get the justice they rightfully deserve.

In her Mother’s Day message, she touched on the crisis involving the abuse of vulnerable children who trusted adults to look after their welfare.

The following is the full message From the Leader of the Opposition on the occasion of Mother’s Day 2022:

Today we celebrate the mothers of our nation as well as the important role motherhood plays in our society.
Unfortunately this Mother’s Day comes at a time when our nation is shocked by the horrific stories of abuse and neglect occurring at a state facility run by the Children’s Authority (CA), meant to serve as a safe haven for vulnerable children.

A report led by an independent investigation team found multiple failings at the facility including physical, mental and sexual violence being inflicted on children. The report also found that former CA director Nichola Harvey- Mitchell contacted a known gang leader to retrieve five boys who fled the facility in March 2021. Two of those boys would later be found murdered.

This damning report detailing serious abuse of children was given to Gender and Child Affairs Minister Ayanna Webster-Roy last December, yet Minister Webster-Roy only chose to present the report to the nation last week, a full five months after receiving it. Minister Webster-Roy’s lethargic response to this serious issue is shameful and appalling.

Equally repugnant is the response to this crisis by former CA director Nichola Harvey-Mitchell who has chosen to ignore demands for an explanation for the negligent conduct of the CA under her tenure. Perhaps Ms Harvey-Mitchell is of the view that since she was appointed by Keith Rowley to manage the CA there will be no consequences for her conduct.

This crisis involving the abuse of vulnerable children who trusted adults to look after their welfare cannot be allowed to be swept under the rug in the guise of yet another Government appointed committee. Those whose job it was to safeguard the well being of these children, a task which they miserably failed, must immediately be held accountable for their actions.

The primary instinct of all mothers is to keep their children safe from harm. We as a nation cannot turn a blind eye to the wilful abuse and neglect of children. To do so would be akin to destroying the very soul of Trinidad and Tobago.

Today on Mother’s Day I am asking all mothers in our land to join together in one voice and demand that the children who have been abused under the care of this government get the justice they rightfully deserve.