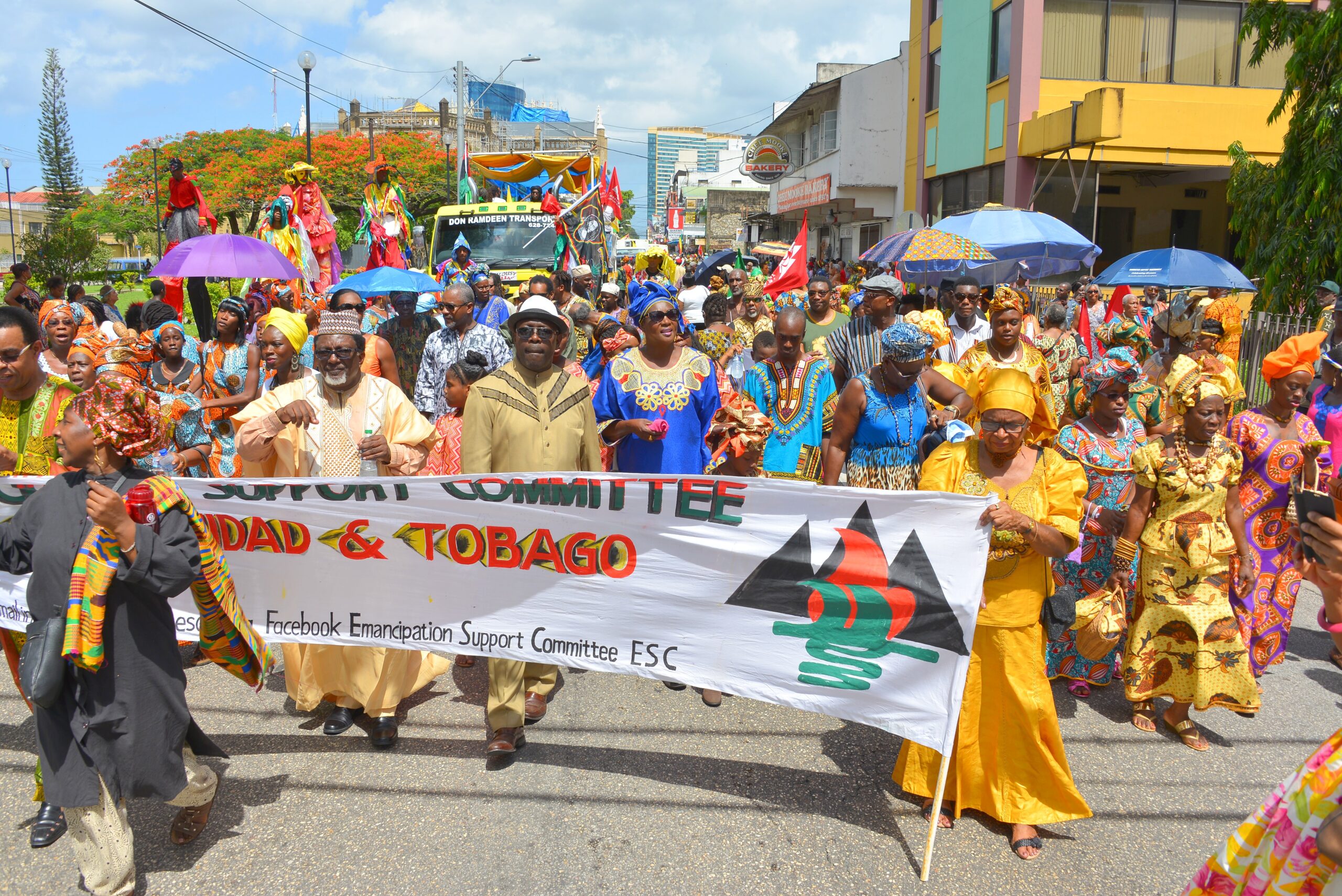 The Emancipation Support Committee of Trinidad and Tobago (ESCTT) has announced the Kambule Street Procession, the culmination of the 2022 Pan African FestivalTT, will take place this year on August 1.

After a two-year hiatus from a physical parade, the Committee is excited to facilitate this grand celebration of Emancipation. The much-anticipated procession through the streets of Port of Spain, is scheduled to begin at 9am from the Treasury Building, in front of the national monument to the African spirit of resistance, Arise.

Marking its 30th anniversary this year, with the theme Commemorating 30 Years of Transformation and Resilience, this year’s festival is supported by the Ministry of Tourism, Culture and the Arts; the Sport and Cultural Fund of the Office of the Prime Minister; with contributions from corporate partners such as the National Lotteries Control Board, Digicel, the National Gas Company and the Unit Trust Corporation who believe in the resilience of the African spirit. Trinidad Tourism Limited has also partnered with the ESCTT, supporting its “Come Back Home for Emancipation” campaign.

The international campaign invites brothers and sisters, friends, and family in the Diaspora to Come Home for Emancipation 2022.

It has as its centre-piece an infomercial featuring voice by Rembunction Productions and the amazing music and song of Sheldon Blackman. Visitors are invited to participate in the Village activities as well as experience specially curated African Heritage Tours. Among the ongoing activities of the Pan African Festival is the Kwame Ture Memorial Lecture Series which was launched in June.

Named after the renowned son of the soil, the month-long series is designed to educate and raise consciousness The third instalment of the on-line series takes place on July 17 with a panel discussion titled – Reimagining Haiti: Restitution, Reparations and Solidarity. The series will end on July 24 with AI expert Renee Cummings when she speaks on Decolonising Data and Democratising Artificial Intelligence.

Also of note is the 20th Annual Trans-Atlantic Business and Development Round Table on July 30.
This will be held at the VIP room at the Lidj Yasu Omowale Emancipation Village, Queen’s Park Savannah, in collaboration with the Ministry of Trade and Investment. TheRoundtable will provide a networking opportunity for entrepreneurs in Trinidad and Tobago to discuss the challenges and opportunities presented by today’s global economic environment, with their counterparts from Africa, the US, and the Caribbean.

The Lidj Yasu Omowale Emancipation Village has earned the reputation of having the largest collection of African-inspired art, craft, jewellery, clothing, and food. This year will beno exception, patrons are welcomed to visit when the Emancipation Village is officially opened on July 29 at 10am. In the evening, the Committee presents Shikamoo DavidRudder, a Calypso Concert at which tribute will be paid to the calypsonian extraordinaire.

On July 30, the Emancipation Village will place the spotlight on some of T&T’s talented performers. The Rhythm and Voices of Africa will take place at 3pm and a few hours later, members of the Rapso community will come together to remember and pay tribute to Brother Resistance at 5.30pm. Culminating the evening of music, will be a Unity Reggae Concert at 8p.On July 31, Family Day, there will be another session of Rhythm and Voices of Africa between noon and 6pm and the Youth Steel Explosion at 3pm.

Lovers of jazz will have a special session at 6pm with Jazz at Sunset and pan lovers can enjoy Pan by Moonlight at7pm.Every day at the Village there will be Capoeira demonstrations from 3pm – 5pm and other interesting activities for the youth. On Emancipation Day – August 1, the celebrations shift into full gear starting at 4am., at theAll Stars Pan Yard, East Dry River from where a procession will head to the Yoruba Village Monument and then to the Arise Monument in front of the Treasury Building. At 8 am, Yedaase: A Tribute to Our Ancestors will take place in front of the Treasury Building on Independence Square, Port of Spain. When the Kambule ends at the Emancipation Village, expect non-stop cultural performances. At 3pm the final session of Rhythm and Voices of Africa will be presented.

To close this year’s celebrations, there will be a Flambeau Procession at 7pm which will end at as the day began, at Massy All Stars Pan yard. After 30 years, the ESCTT remains committed to ensure the continuation of the festival in a manner that is appropriate to what it represents. It is celebratory, positively inspiring, and sacred.

The Emancipation Village will be open every day from Friday July 29 to August 1 from 10am.
After 3pm each day, there is an entrance fee of TT$30, Children under 12 are FREE. Civil society, youth, community groups and NGOs are invited to register for the Kambule at 628-5008 or 471-7345.