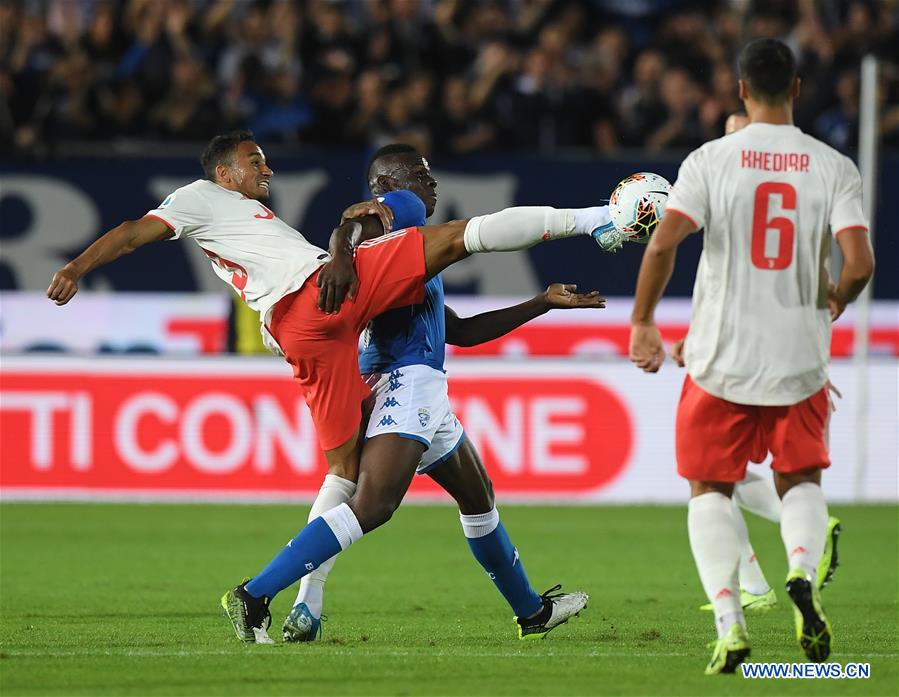 Juventus Beat Brescia 2-1 to Go Top of Serie A

Juventus came from behind to go top of Serie A with a 2-1 win at Brescia on Tuesday as Mario Balotelli marked his return to Italian football.

Alfredo Donnarumma gave the hosts an early lead at the Stadio Mario Rigamonti but Juve hit back through a Jhon Chancellor own goal and a Miralem Pjanic strike either side of the break.

Balotelli made his debut for his hometown club after completing a four-match suspension that he was handed at Olympique de Marseille last season, while the visitors were without Cristiano Ronaldo as he recovers from injury.

Maurizio Sarri’s side edged an entertaining encounter to continue their unbeaten start to the season and the coach was encouraged to see improvements from his team.

“We improved a great deal in our passing and had more control of the game, but we need to improve in our defending,” he told DAZN.

“I saw steps forward in the way we created chances too, as there were basically three goal-line clearances and it wasn’t easy after going behind within four minutes in a passionate atmosphere.”

Juventus have moved on to 13 points at the summit of the table, one ahead of Inter Milan, but Antonio Conte’s side can return to first place by beating Lazio at San Siro on Wednesday, while a draw would also be enough to send them top on goal difference.

Sarri tinkered with his formation in the absence of Ronaldo, selecting former Arsenal midfielder Aaron Ramsey behind a front pair of Paulo Dybala and Gonzalo Higuain in a new-look 4-3-1-2 formation.

The champions got off to a nightmare start when Donnarumma, last season’s top scorer in Serie B, caught Juve goalkeeper Wojciech Szczesny off guard as he fired a powerful shot past the Pole inside four minutes.

Juve went in search of an equalizer as Sami Khedira flashed a shot narrowly wide and Higuain’s glancing header went just past the far post, while Balotelli connected brilliantly with a long-range free-kick to draw a flying save out of Szczesny.

Sarri’s side drew level five minutes before halftime when Dybala’s whipped corner caused chaos in the Brescia six-yard box as goalkeeper Jesse Joronen failed to gather and the ball ricocheted off defender Chancellor and into his own net.

Juventus pressed for a second after the break as Joronen saved well from Higuain and Chancellor cleared an Adrien Rabiot shot off the line.

They made the breakthrough when Dybala’s free-kick rebounded off the wall into the path of Pjanic, who struck a beautifully controlled half-volley into the bottom corner.

Brescia responded as Daniele Dessena’s strike whistled just past the post and Dimitri Bisoli volleyed over from close range before Balotelli rose to meet a cross in stoppage time only to direct his header over.

In Tuesday’s other fixture, Hellas Verona and Udinese played out a 0-0 draw at the Stadio Marc’Antonio Bentegodi.