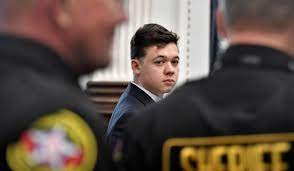 The judge at Kyle Rittenhouse’s murder trial has dismissed a count of possession of a dangerous weapon by a person under 18.

The charge is only a misdemeanor, but it had appeared to be among the likeliest to net a conviction for prosecutors. There’s no dispute that Rittenhouse was 17 when he carried an AR-style semi-automatic rifle on the streets of Kenosha in August 2020 and used it to kill two men and wound a third.

But the defense argued that Wisconsin’s statute had an exception that could be read to clear Rittenhouse. That exception involves whether or not a rifle or shotgun is short-barreled.

After prosecutors conceded in court Monday that Rittenhouse’s rifle was not short-barreled, Judge Bruce Schroeder dismissed the charge.

The ruling came just before attorneys were set to deliver closing arguments Monday.

Rittenhouse, 18, of Antioch, Illinois, faces charges ranging from intentional homicide, which is punishable by life in prison to an underage weapons charge, that could mean a few months in jail if convicted.