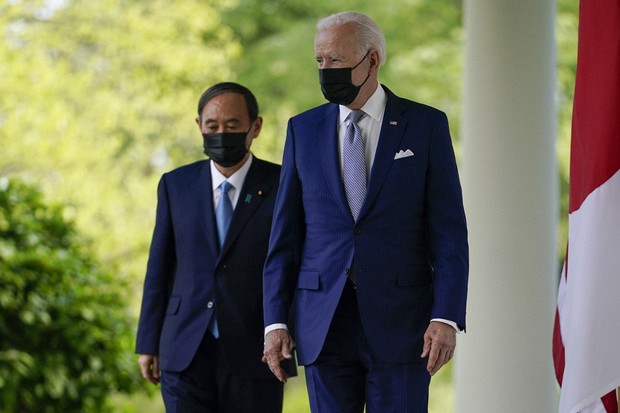 In light of China’s increasing drive for power in the region, the US and Japan have emphasized the importance of a peaceful, free and open Indo-Pacific region.

The two countries opposed any attempts to “change the status quo through force or coercion,” said Japanese Prime Minister Yoshihide Suga on Friday during a visit to the White House in Washington. This applies in particular to the South China Sea and the “intimidation” of neighboring countries, he said through a translator.

US President Joe Biden, as host, stressed that the two states agreed to work together “to meet the challenge from China”. It is about “guaranteeing the future of a free and open Indo-Pacific”.

Biden also emphasized that the alliance with Japan and the US guarantee for the security of the partner are “iron”. With its nuclear arsenal, the USA is Japan’s protective power; thousands of US soldiers are also stationed in the country.

Biden and Suga did not comment directly on Beijing’s attempted military intimidation against the island state of Taiwan, which the Communist People’s Republic claims as part of China.

Suga stressed that the US and Japan had reaffirmed the importance of “peace and stability” in the Taiwan Strait. Biden and Suga also announced their intention to work with South Korea to meet the challenge posed by the North Korean nuclear program.

For Biden, Suga’s visit was the first visit by a foreign head of state or government to the White House: Because of the corona pandemic, the US president had not personally received anyone of this rank in Washington since he took office on January 20.

Lack Of Job Opportunities Does Nothing For Economy Already Under Strain, Opposition Leader Says. 0