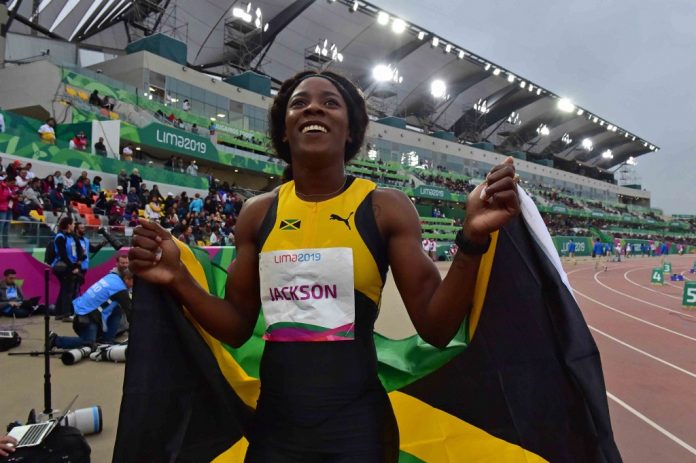 Jamaica continued to mine gold in track and field events at Pan American Games in Lima, Peru when Shericka Jackson won the women 400m event on Thursday.in a time of 50.73 seconds.

Jackson, who had won bronze medals in 400m at the IAAF World Championships in Beijing, China, in 2015 and the Rio Olympics in 2016, won Jamaica’s fourth gold medal in track and field at the Pan American Games.

At the close of the day on Thursday, Jamaica has now won 12 medals in track and field, inclusive of four gold, four silver, and four bronze.

Jackson, the CAC Games 200m champion last year, comfortably won the 400m ahead of Mexico’s Paola Moran who took the silver in 51.02 seconds and American Courtney Okolo won the bronze medal in 51.22 seconds.

Moments after Jackson’s gold medal run, Gaye was narrowly beaten on the finishing line by the fast-finishing Colombian Anthony Zambrano and had to settle for the silver in 44.94 seconds. Zambrano took the gold in 44.83 seconds.

Williamson started well in the high jump, clearing the first three heights on her first attempt, but failed to get over 1.87m.

The US-based Williamson, who was sixth in the event held in Canada four years ago with 1.88m, is yet to achieve the IAAF World Champs qualifying mark of 1.94m to qualify for the event in Doha, Qatar, later this year.

Triston Thompson allegedly excpecting a third child with another woman 0