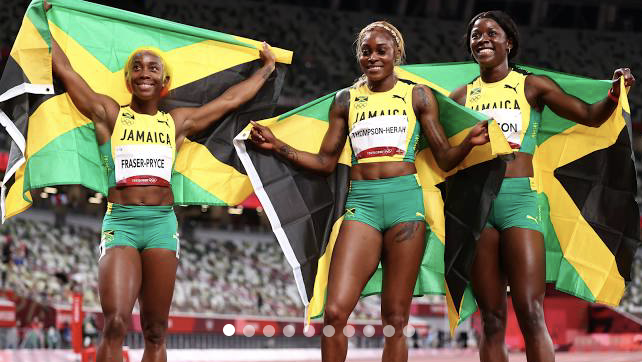 Defending champion Elaine Thompson-Herah led a Jamaican sweep in the women’s 100 meters Saturday at the Tokyo Summer Games, capturing gold in an Olympic-record time of 10.61 seconds. Thompson-Herah’s time was also the second-fastest women’s 100 of all time. Veteran teammate Shelly-Ann Fraser-Pryce took the silver in 10.74 seconds while Shericka Jackson, also of Jamaica, was third in 10.76. Teahna Daniels of the U.S. was seventh in 11.02. Thompson-Herah’s record time, which came despite a headwind of -0.6 meters per second, broke American star Florence Griffith-Joyner’s 33-year-old mark of 10.62. Griffith-Joyner still holds the world record in the event, running a 10.49 in July 1988. Jamaica has dominated women’s sprinting recently, winning all but two silver medals in the last four Olympic Games. Fraser-Pryce, 34, won gold in 2008 and 2012 and bronze in 2016, when Thompson-Herah, 29, raced to the title.