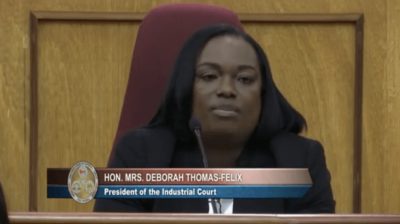 Viewpoint- Her Hon. Deborah Thomas-Felix – President of the Industrial Court
(This publication is used with Justice Thomas Felix’s permission)

“I am listening to a comment which says that what is happening in America  is insidious, and I am thinking insidious is somewhat mild. Insidious is when something gradually creeps and proceeds in a subtle way to cause a measure of  harm. However, I think that Black people have been harmed for centuries , and what is in fact in place and entrenched over centuries  is systemic and systematic racism, racism which has caused centuries of pain, anguish and harm. Racism which has caused deep rooted feelings of insecurity, low self-esteem , low self worth  in some human beings and a feeling of superiority and entitlement in others .

Racism which has shaped the narrative, the  thinking and the perception of the entire world towards one race of people. Systemic and systematic racism  which was instituted more than 300 years ago  and which has also shaped the behaviour of human beings worldwide towards one race of people up to today. It has been institutionalized  and accepted, we see it played out everyday in socioeconomics,violence, education and other aspects of day-to-day life. My view is that this is not mere insidious behaviour , but ugly, unbridled, dehumanising racism. It is systemic, systematic racism and xenophobia  against an entire race of people because of the colour of their skin and how they look! Can this systemic and systematic injustice can be removed in a week or a month? and can it be removed without the participation of the support of all races including the descendants of those who were oppressors?

It is heartening to see the participation of the young people of all creeds and colours and of all walks of life in every corner of the globe speaking out and participating in this struggle to remove the scourge of racism which one race of people have endured for centuries  . The struggle against injustice in America,the Caribbean, in Europe and each and every corner of the globe can only begin to addressed by an awakening and an understanding in all of us that we can do better, that no race is superior       , and that the decisions of our forefathers should not be perpetuated by us   , century after century.   We must always remember the words  of Dr Martin Luther King that “Injustice anywhere is a threat to justice everywhere. Blessings”.