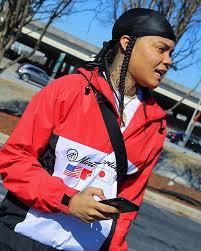 Twitter has been buzzing with rumors stating Young M.A is pregnant and these were also followed by some Kodak Black jokes.

Young M.A is all set to make her return after she took a break to check into rehab.

The gossip spread like wildfire following the rapper’s interview with Headkrack on Dish Nation.

The host asked Young M.A if she could see herself one day becoming a parent, and the rapper was quick to say she not only wanted too; but wants to be married before she has children.

Headkrack then asked if she wanted boys or girls and how many of each. “I want a boy,” said the rapper. “I want a boy first and then a girl.

Young M.A later clarified that she will not be the one who will carry her child but her girlfriend would.

Man held with gun in Grande 0